Purba Medinipur district of West Bengal is a disaster prone area especially affected by cyclones and flooding. There was no shelter for adults and children to save their lives from calamities: they had no idea how to save themselves from disaster. As a result, there was much loss of property and life during the floods of 2008. Their lives became deplorable especially when children faced a panic situation during the period before 2010. KJKS took initiative to form a task force in thirty selected villages of Pataspur Block to educate the community on how to manage the situation during the flood and post flood situation as well as pre-flood measures. RED-R came forward to train people on the issues of how to rescue and how to go to the rescue centers, along with how to care for children during flood situations. Sarijoni Naidu is one such type of task force that was established at Tupchibar village. These types of task force do not give importance only to the aforesaid activities; they also give importance to their controlled and hygienic food service during the floods by collecting grains throughout the year for emergency, storing paddy in a store room (“Dhaner Gola”), and preparing rice from June-July for use at the time of emergency. In this way they collected 2934kg of paddy, which has a market value of more than Rs. 44000/-. They will use their funds during the emergency if government relief comes late during the flood season to support flood-affected people. Kajla Janakalyan Samiti gave task force kits to each task force, which has market value more than Rs.20000/-, which can be used during the floods to rescue flood affected people.

Training on pre, during, and post-flood situation control enriched the community to manage the panic situation, is no doubt CBDRM. The Task Force trained the community on this with the support of local government i.e. panchayet. In the community all took part to save themselves by collecting grains for future use.
All marginalised groups and at risk groups were included in the CBDRM process, especially children and women who were members of the Task Force.
With the formation of the Task Force, change was observed among the community as they become more aware about managing the situation during floods i.e. emergency preparedness.

They understand the need to use local resources. As a result they collect grains for future use.
People of that area were not themselves aware of disaster but after the project they become cautioned and knew how to tackle the situation.

To sustain the project it was very essential to equip the shelter with various instruments i.e. boat, rope and other necessary arrangements during the disaster. 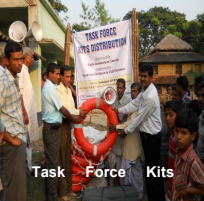