Purba Medinipur district of West Bengal is a disaster prone area especially affected by cyclones and flooding. There was no shelter for adults and children to save their lives from calamities. Most of the areas have no proper drainage system and as a result, water has logged during monsoon, flooding the area. The embankment area of the Keleghai River was very weak, so many places have breached on a regular basis. In addition, due to improper navigability of same river, water has overflowed and submerged entire areas, resulting in flooding each year. Lives became deplorable and children faced a panic situation during the period before 2010. KJKS believed that people should be motivated to engage in disaster risk mitigation. Most of the people in this area do not have proper knowledge on DRM. Most of the stakeholders have special interest on relief work and they were highly motivated to manage relief materials negatively. Kajla Janakalyan Samity started work with the formation of different community level institutions in the year 2010. KJKS put particular emphasis on motivating people including children to engage with disaster risk mitigation themselves. KJKS formed a task force and improved their capacity on CBDRM, initiated and prepared resources and vulnerability maps in every village, led by the community members. In addition to the capacity building program, KJKS organized human and livestock health check-up camps, installation of disaster resilience drinking water sources and 3 child friendly community shelters, and motivated people to engage in disaster resilient agriculture and non agriculture practices, etc.

All financial and technical support came from Save the Children and the local community and it was a two year tenure program. Local self government and dedicated people of the areas have been provided their valuable time, land and others materials to create an environment for implementing the CBDRM related activities in the area.

KJKS, Save the Children and the local community jointly decided to build child friendly disaster resilience shelters in the three most disaster prone areas: at Khejurgachia of Bhagabanpur Block-II, Pusa of Pataspur Block-I and at Bamunda of Pataspur Block-II. Kindhearted men in those areas came forward to donate land for constructing shelters. Mr. Sudarsan Sau of Bamunda village donated 5 decimal land for building shelter in the area. The shelter named “Sonar Tari” is used especially from the month of June to September. Flood affected people i.e. adult and children take shelter during this period. The activities ran from 2010 to 2012.

Out of all the CBDRM activities, the child friendly community shelter was the most expensive and important one. After completion of the construction of the shelter KJKS handed over the ownership of the shelter to the locality and they formed a committee to look after it by their own initiation, creating a feeling of ownership. Before starting the construction work KJKS shared the entire plan and estimates with the local self government and community people; as a result it has found that local community has provided land as well as part labour and the local self government supported the earth work through Mahatma Gandhi National Rural Employment Guarantee Scheme (MGNREGS). The entire activity was implemented with close monitoring coordination by the local implementation committee and task force committee. The local implementation committee and task force committee reviewed the entire activity in their respective meeting on a regular basis and solved any type of obligation/obstruction that was created during the implementation in the field. After the inauguration and handing over of the child friendly community flood shelter to the committee in 2012, it was decided that for the remaining months of year it would be used as a tuition centre to educate children of that area, run by the local educated, unemployed youth and the locality that formed a committee for looking after the construction regularly. They established a library at the shelter by taking help and donations from the local people of the area. In addition, the shelter is now used as a training centre of skill development for the Indian Government project and SHG orientation camp. Now, the community of that area takes initiative establish a school for children at the shelter. Local government of that panchayat also uses it for various training and meeting purposes and looks after the construction.
KJKS believes that women, children and disabled persons are the most vulnerable during any type of disaster. Keeping in this mind, KJKS implemented all their CBDRM activities with active participation of women, children, youth and disabled persons. KJKS has formed village level women's groups, children's groups & youth groups and developed their skills in CBDRM. Village level vulnerability and resource mapping was conducted by them. During shelter construction, the most vulnerable sector jointly protected all the materials of the shelter. Since completion, they have conducted meetings at this centre. The shelter is used during the disaster by all who are affected. Outside of this, it is used by youth and children for running a tuition centre where all the marginalised benefit. Skills development training is organised there that support youth. SHG trainings are organised in which women are benefiting.
People have not believed in CBDRM, During the initiation of the program KJKS clearly discussed the entire plan and program with local self government and a few social leaders. KJKS formed different village level institutions such as women SHGs, farmers' groups, children's groups, and youth groups, and met with local school administration. KJKS conducted village mapping using PRA tools. People of entire areas gradually showed their interest to join with our activities; at that time KJKS volunteers were included in every activity as resources volunteers.

To sustain the project it is very essential to equip the shelter with various instruments i.e. boat, rope and other necessary arrangements during the disaster. 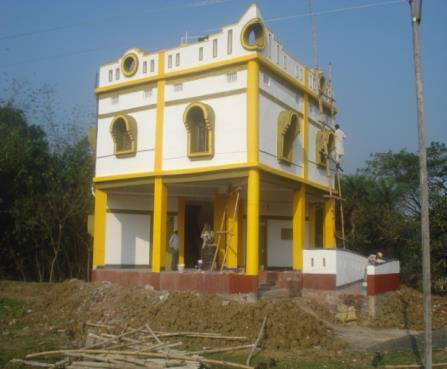