The Philippines is one of the most disaster-prone countries in the Asia-Pacific region, and because it is still a developing economy, each disaster slows down the Philippines’ economic progress, leaving vulnerable households to suffer the most. The Sustainable and Resilient Agribusiness Development in Mercedes (SARAM) project aims to reduce the level of poverty in 18 rural barangays in Mercedes Municipality, Camarines Norte. This proposed activity will be implemented in Mercedes, which is one of the poorest municipalities of Camarines Norte Province, in Region V of the Philippines, where 73% of the households are living below the poverty threshold. This poverty is compounded due to insufficient rice supply in-country, inadequate access to protein, and limited intake of fruits and vegetable for many families.

ADRA Philippines managed this project, utilising professional staff consisting of a project manager, a bookkeeper and five field officers, along with technical assistance from specialist partners. Major activities include training and implementation of Systems Rice Intensification (SRI) rice growing, training and establishment of fish farms, preparation and planting of vegetable gardens and the mainstreaming of community-based disaster risk. The title of the case study was “CBDRM and the Practice of Sustainable and Resilient Agribusiness Development in Mercedes, Camarines Norte Management”.

ADRA Philippines worked in close partnership with ADRA New Zealand for support and expertise in DRR and livelihood development. Other key partners included SRI Pilipinas and SPACFI Caritas in Daet, the Municipal Agriculture Office (MAO) of Mercedes, Bureau of Fisheries and Aquatic Resources (BFAR), and Centre for Disaster Preparedness (CDP), which will synergise wide experience and expertise in the implementation of CBDRM. This project was implemented from January 1, 2013 until December 31, 2015.

The project aims to decrease poverty, increase the wellness of malnourished children, and ensure that the agricultural livelihood is sustainable and resilient.

The project also developed a mentoring team composed of different heads of departments.

The partner municipality has demonstrated strong ownership of the project through its local government unit (LGU) for it has provided support to cover all the 26 barangays since, originally, only 18 barangays were covered for the project intervention. The LGU provided all the necessary support such as funding and other logistical needs to CDP and other communities. The local government was truly capacitated and has adapted the project and they were able to fully help the people.
The direct beneficiaries are 1,000 rice farmers (from 12 barangays), 150 fisherfolk (from 7 barangays), 420 households (from 14 barangays), and 145 members of 18 Barangay DRR and Management Committees in 18 rural Barangays of Mercedes. There are a total of 1,715 households that benefitted directly from this project while the indirect beneficiaries are 6,860 individual family members. An additional 8 barangays were also covered by the project through the assistance of the LGU in order to cater to the rest of the barangays in the municipality of Mercedes. The project team was able to organize rice farmers and labourers in groups, both men and women were trained and equipped with skills for farming and gardening, fisher folks were also involved (both men and women), and the team has also reached out to children (the project helped them link with another CDP project on child-centered DRRM entitled DRREAM BIG). Beyond the project, the youth network was supported., Women and older persons were involved in all the activities.
The project was adjusted as necessary through the consultation meetings with the LGU and barangays (brgys) represented by the Brgy. Council and other sectors. The project also managed to link together groups that were not closely working together. One example was the situation of Brgy. Poblacion where some of its officials have a political conflict with the municipal LGU. The project also accommodated the different contexts of the barangays e.g. there were island barangays with different experiences compared with those that are land- based. Through the mentoring team, a series of validation activities were also conducted to know whether the activities are helpful to the people of the municipality. After the project, CDP was also able to monitor and write a case study about the project and produce a video production entitled, “Waves of resilience.” CDP also created a video that tackles the construction of “paruyog”/artificial reef led by the municipal and barangay LGU.

Until now, CDP has been able to monitor the continuity of the project initiatives through study visits conducted by the organization as part of current projects. This year, through the Consortium on Humanitarian Action and Protection (CHAP) project, CDP observed that they are the ones teaching other municipalities like Labo and also the PDRRMO. It is also crucial that the LGU has given time and resources. This project helped the LGU become more engaged in the barangays and devout resources.
When there’s a typhoon, they are able to prepare themselves, not just their lives but their livelihood thus, they become more sustainable and resilient. 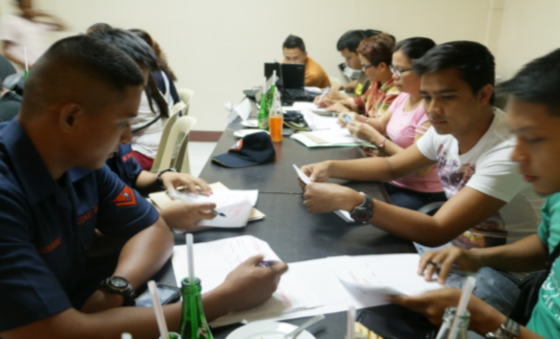