Palang Merah Indonesia (PMI) with support from the American Red Cross is implementing urban DRR and CCA in Greater Jakarta. This project is using an integrated community-based risk reduction (ICBRR) approach for interventions where climate-related hazards are the focus. As an approach, the core community is targeted through the establishment of SIBAT (community-based preparedness team). As a targeted area located in a major river watershed, the Ciliwung River, flooding is likely a major hazard in all communities.

Flooding is the highest risk hazard based on the Disaster Management Local Agency’s assessment through their Disaster Management Plan report. Bogor is the upstream area of the river and North Jakarta is the downstream area of the river. PMI with funding support from American Red Cross implemented a project from 2012-2018 to have an integrated intervention between upstream and downstream.

The river watershed is a hotspot for interventions, especially since it flows through the capital city of Indonesia. Many actors both local and international, have worked in DRR and CCA in this area.  Some of them work directly with communities and some work with local government.

One intervention of the project was community solid waste management. In a particular area, we developed a solid waste or recycling centre, called the Recycling and Community Handicraft Centre (PDUKM in Indonesian). PDUKM is managed by SIBAT. Through the existence of this facility, PDUKM succeeded to provoke the community to establish a garbage bank (bank sampah) in the area, as they needed non-organic waste for their production. Another intervention focused on revitalization of green open space (ruang terbuka hijau) to become an evacuation centre. In collaboration with Universitas Indonesia, SIBAT is utilizing the open space not only for emergency purposes, but they also trained communities in basic first aid and campaigns related to disaster risk reduction and health. SIBAT is the key centre of CBDRM. SIBAT is formed by PMI but acknowledged by the village government. The local government is fully aware of this and they have replicated the establishment of SIBAT in more villages in the area. Local government provided their resources to support this project. For example, the Forestry Agency of DKI Jakarta provided their land as an evacuation centre. The Environment Agency of Bogor District incorporated SIBAT in every clean and green campaign. BAPPEDA of Bogor district embraced PMI as part of the working group for solid waste management issues in the district.
The first step of the intervention was to conduct hazard, vulnerability and capacity assessments to determine exactly who are the vulnerable, marginalized, whether they are particular age groups, students, etc. We considered children as vulnerable through the VCA and intervened at the school for to conduct disaster preparedness through a Disaster Safe School intervention. We considered that women were vulnerable and trained them for livelihood alternatives, so that they still have an income in case of disaster.
The ICBRR project was contextualized or adjusted with the local conditions through the VCA, which then they propose the community action plan. Priority actions that are possibly funded through this project will be executed and the rest will be advocated to external stakeholders such as local governments.

The community solid waste management will remain sustainable since SIBAT manages the system and it is already benefiting them. PDUKM are now part of the local government network through the Environment Agency. The community will use the green open space during emergency but during normal situation, they will use it as a community meeting point where children play in the playing ground, and adults or parents watch them or socialize with each other. At the same time, SIBAT uses the open space to teach or train community members on multiple topics such as basic first aid, 3R, health campaigns, etc. SIBAT also organized the community for collective saving to maintain the open space. Now, the community has access to various external resources such as the local government and private sector. Having this connection improved their self-esteem to speak. Urban farming will continue because the community is now mastering the farming and they already earn money from that activity. This is an alternative livelihood as an option in urban complex. Once they understand that the urban farming is profitable and beneficial, they will keep growing vegetables in the field. The very significant impact of the awareness movement has led to biopori and absorption wells, helping solve the water shortage crisis in Bogor, which was a problem in 2013 and 2014.
Life is changing in the community. A simple example is through waste separation at the household level. They are now throwing garbage into waste facilities created through this project. During the rainy season in the last years, the community in North Jakarta did not experience any flooding because of clean drainage. Although it is also caused by government interventions, that behaviour has already reduced the flood risk. The community is now aware about disasters. We helped them learn about weather, climate and early warnings through the BMKG (Meteorological, Climatology and Geophysics Agency) website. Now, they keep sharing weather predictions and early warnings through their own Whatsapp group. Although this is part of the project indicator, they do it voluntarily because we do not pay their internet data. Willingness to share preparedness is the obvious change up to now and we believe that this will continue even after the end of this project.

The ICBRR project is mostly at the community level as the centre of disaster risk reduction. We realize that this is not enough for enhancing community resilience because many external factors will influence it. Institutional resilience is a key aspect here. We strengthened collaboration with local government and universities to provide networks, expertise and policy agendas. In Jakarta, we are now in close engagement with the governor's office to develop a Community Based Disaster Management Grand Design that will be integrated into local planning and development. By having this, CBDRM will be more institutionalized in local government. We will also collaborate with Universitas Indonesia and Universitas Podomoro to train and assist the community in different topics. Cooperation with University of Indonesia focuses on how to design a greener, cleaner, healthier and more comfortable environment. A total of 9 green open spaces have been built in Bogor and 1 green open space has been built in North Jakarta.
CBDRM is part of the national strategy for Disaster Resilient Villages (desa tangguh bencana). The National Disaster Management Agency has issued regulation about this that is being implemented in many places across Indonesia. ICBRR is a standardized CBDRM initiative developed by PMI which is now used by many projects. There are similarities with the Disaster Resilient Village initiative. This ICBRR has relationships with local government. In Bogor Regency for example, Camat (head of sub-district under regency) of Cibinong sub-district has issued a new act to establish 10 SIBAT in 10 villages. This is because through this project, we already implemented 3 SIBAT under the Cibinong sub-district. Now, SIBAT is standardized in this sub-district.
The Local Disaster Management Agency is the responsible body coordinating any disaster management activities including at the community level. This is clearly stated through the Disaster Management Law number 24/2007. At the local level, the head of village government leads DRR committees which formed to discuss and approve program plans, budgeting and supervision. SIBAT as PMI volunteers in the village level is a key actor and key partner of local government to manage CBDRM programs. As for the implementation carried out with full participation of the community, the role of SIBAT is to facilitate the process of risk assessment, planning and directing the implementation process in accordance with the expected objectives and outputs. The NHQ PMI is supported by donors providing partial funding support, while the rest of the funding is fulfilled by the government as well as the communities. The private sector also helps the development and expansion of covered areas. The government provided the land for Green Open Space which also can be used as a community center, meeting point, evacuation center, and many other purposes. SIBAT and communities received support for capacity building from PMI NHQ, PMI Province and PMI District. Capacity building support was also obtained from the government, Indonesian University and also Podomoro University.
One way to obtain long-term funding is to make the ICBRR program in urban contexts integrated in the Medium Term and Long Term Development Program both in DKI Jakarta and Bogor Government. Facilitated by PMI Bogor and Bogor Government, SIBAT PMI builds networks with private sectors and hotel owners in Bogor for waste management. SIBAT PMI will pick up plastic waste and paper and organic waste to be processed in the waste processing unit owned by SIBAT PMI. Plastic waste and paper will be processed into handicrafts and organic waste in composting. Compost and handicrafts are sold to residents to earn money that can be used for operational financing, SIBAT incentives and also financing of DRR activities.
The encouraging aspect of this program is the confidence and recognition of the Provincial Government of DKI Jakarta for the role and existence of SIBAT PMI as the motivator and facilitator of the ICBRR program. SIBAT PMI has become a drafting team of the City Development Plan based on CBDRM. SIBAT PMI works best to build a culture of communities to have cleaner and healthier behaviors. Communities are becoming aware that littering garbage in sewers and waterways and in rivers will trigger floods. SIBAT PMI has successfully advocated to the government to make Local Government Regulation (PERDA) of Bogor prohibiting disposal of garbage in any place. In the PERDA, it has been expressly stated that punishment and sanction against people who litter. The encouraging aspect of this program is the confidence and recognition of the Provincial Government of DKI Jakarta on the role and existence of SIBAT PMI as the motivator and facilitator of the ICBRR program. SIBAT PMI has become a drafting team of the City Development Plan based on CBDRM. Communities are also becoming aware that the availability of water in urban areas is getting limited, so they must make water security and water savings. Meanwhile in the Bogor area they are well aware of the need to save as much water as possible by making as many bio Pori and absorption wells as possible. In Bogor, especially in the Urban-ICBRR program areas, each house is required to produce at least 2 biopori units and at least one catchment well in each neighborhood. The very significant impact of the awareness movement of the need to make biopori and absorption wells is that there is no longer a water shortage crisis in Bogor, which was a problem in 2013 and 2014. 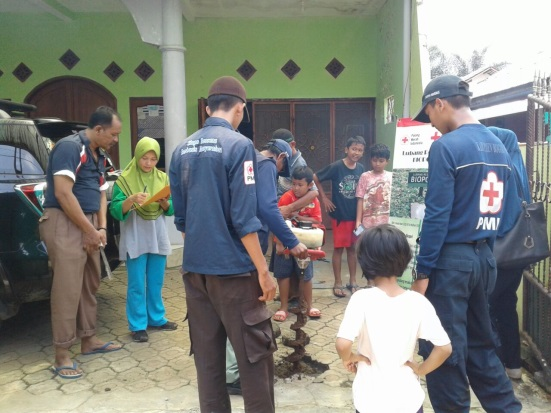