The project for the community management of disaster risks has been carried out under the framework of the GNDR project “Action at the Frontline” and “Frontline” since 2013.

Partners included GNDR, Shalom International, The Town Hall of Grand Yoff, the Association of Young People with Development Awareness of Senegal (AJCDS) and other community associations of Grand Yoff and Thiaroye.

With the various risk perspectives listed by the various groups in the community, it is important to make it less difficult to bring together the groups of women and young people to have a common position, since each person is putting his/her views on the table. As a facilitator, I have held individual meetings with each group, obtained their views, discussed the details and then organised a joint meeting of the community with all the groups present. In this way, we have been able to share the views of the various groups and agree on a common objective while establishing the priority risks. The local know-how has been adopted as a strategy for reducing disasters at the level of the targeted communities. Education and awareness-raising also play a role as a strategy to make people aware of their vulnerability. The local populations need to understand the concept of disasters and how they can be caused by the effects of climate change. Education can free them from traditional stereotypes whereby the local populations tend to view disasters only as a spiritual interaction rather than the effect of climate or geographical change. The actors of the local administration and the mayor have contributed to the project to strengthen resilience by: • Regularly providing waste disposal trucks to help the population to reduce the impact of floods. • Applying the relevant environmental regulations to ensure that the market places and parking lots are well maintained by the users. • Providing an opportunity for the members of the community to express their views during the advocacy visits and helping to involve other State actors.
To be able to adapt the CBDRM activities so that they take into account the contexts of the community, it is necessary to hear the opinion of all the groups in the community. As a facilitator, I had to first meet the various groups, hear their views, problems and frustrations, seek ways to develop collaboration with other groups and then hold collective meetings where each group was free to express their views. The primariy risk problem, as seen by the women's groups, was that they are not widely consulted before decisions are taken during and after disaster situations affecting the community. The proposed solution was to establish sub-committees to coordinate with the various groups in the community before, during and after disasters. This committee consists of women, young people and men. The elderly identified being neglected in times of disasters as their main risk problem. They were concerned because during the heavy floods and/or when it was necessary to move them they were often the last ones to be evacuated if necessary, which leads most times to the loss of lives and property. The solution was to create a special working group to be responsible for the elderly during major disasters. This sub-group has been tasked with working with the emergency teams when they come to the community. The young people and men identified a lack of work tools and materials necessary to help people who are trapped during disasters. Since they are the most active groups in the community, many of the evacuation and coordination efforts depend on them. They also identified inadequate financial resources as being responsible for the failure of a rapid response to disaster events. Men and young people are most often the first group of people who are involved in disasters, so they should have everything necessary for the success of the operations. It is they who work with emergency services such as the Fire Department, it is they who are on site even before the specialised emergency teams. They should have at their disposal equipment such as shovels and hammers to enable them to intervene properly. In most cases, a follow-up committee consisting of men, women, young people and older people has been established in the various communities to ensure that the lessons learned are well used.
As in most African societies, men are always considered to be visible, while the women are relegated to the rear. It is the same scenario when it comes to dealing with the problems of disasters in the community. Women, the elderly, and people with disabilities are often the most marginalized groups in terms of decision-making and planning local actions. As a facilitator, I have had to report the dangers of disasters such as floods and explain why it is the women and the elderly who are most vulnerable, regardless of cultural attitudes. I have had to explain that, even if we must protect our cultural values, floods do not acknowledge or respect those values before unleashing their damage. I have had to create discussion sessions around these issues in the communities and in the family environment. Eventually, women, the elderly and people with disabilities were authorised to take part in the discussions on how to reduce disasters in the community. Decision-making cells within these marginalised groups have been created in the community in the context of CBDRM.

The communities cannot solve all their risk problems alone and the local authorities are not always working at the appropriate administrative level to address the root causes. Consequently, the local populations have established "horizontal links": relations and networks with similar actors (CBOs, CSOs, NGOs) which can be useful for early warning, sharing knowledge, advocacy and expressing common concerns on a wider scale. In addition, "vertical links" with the media, the authorities and powerful actors enable local voices to be heard at the district, regional and country level. By undertaking local actions, the members of the community continue to use traditional and technological methods to strengthen resilience. For example, they have used their own resources to build sand barriers against floods, remove waste from the catchment areas and raise awareness about the management of waste. We hope that these community efforts will continue even after the Frontline project is completed in the places where we have worked.
When implementing community disaster management activities, the emphasis was on small daily disaster events while recognizing the vulnerability of the populations to a wide range of risks such as unemployment, food insecurity, precarious land rights, crime, corruption and conflict. This requires a holistic risk management framework that reflects the multidimensional and interrelated nature of risks: not only DRR but the integration of multiple disciplines such as poverty reduction, adaptation to climate change, peacebuilding, health, natural resource management, etc. Furthermore, this also involves working through scales that include short-term DRR measures that are technical and practical at the community level, together with long-term strategic measures to make the government and the stakeholders accountable and change mindsets, attitudes, policies and practices at the multi-institutional level.

Senegal has certainly made progress in integrating disaster risk reduction and adaptation to climate change in its national policies and plans, such as the creation of the Civil Protection Department (the National DRR platform), the Orsec emergency response plan, the Jaxaay plan and other strategic documents and legislations. Despite this, major challenges remain, in particular in regard to programming, planning and community action plans. In both cases, with the key questions identified as being a concern in their communities, as well as in the recommendations made during the community consultations, the Frontline project respondents pointed out important areas where local, national and international actors should focus their efforts. In summary, they can be categorised as follows: • The challenges related to leadership, coordination and enforcement of laws and regulations, in particular at the level of national governments. • Lack of human and financial capacities, in particular with regard to adequate financing and budgetary allocations at the national and local levels. • Need for more knowledge sharing, awareness raising, and studies and training dedicated to reducing disaster risks at the local level. 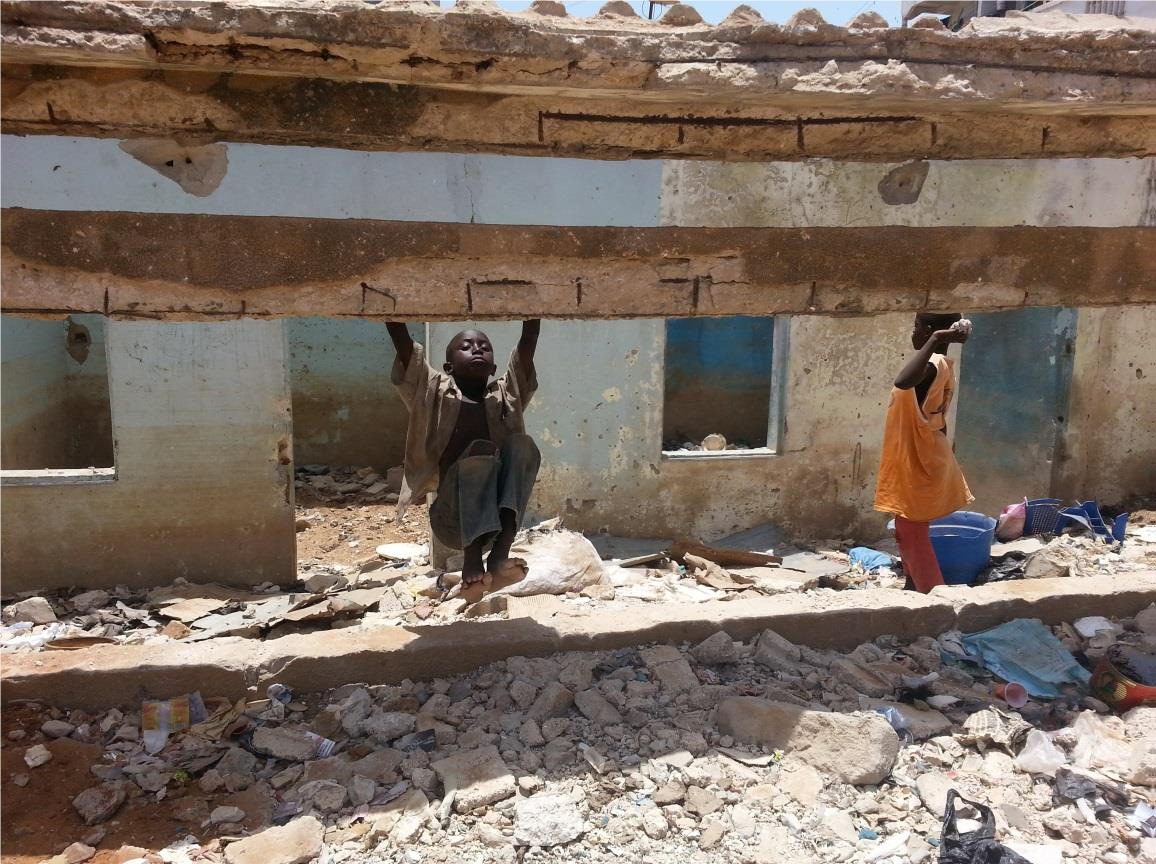