Small producers are living in the eastern region of Burkina Faso in a context of food insecurity and vulnerability caused by repetitive climate shocks (droughts, floods, violent winds…). The agricultural production resulting from their crops is only sufficient to cover their food needs for an average of 6 months in the year. It is with a view to overcoming this situation that Action Contre la Faim (Action against hunger – ACF) established social warrantage (a French word used to describe the inventory credit system) with the most vulnerable communities.

Activities linked to the establishment of social warrantage:

With this loan, each member of the group can develop other income-generating activities such as market gardening, processing and sale of non-wood forest products (soumbala, soap based on vegetable oil extracts) and also small livestock (improved traditional poultry).

The contracted loan is then paid back monthly from the profits derived from these economic activities. During the household’s very low food availability period (months of July, August and September, corresponding to the lean season) – a period that also coincides with the sharp rise of the price of cereals – the stocks are given back to the beneficiaries. These food products can then be sold at a higher price by each beneficiary or be stored as provisions for their own family consumption.

Other actors who participated

Duration of the project

The activity is cyclical and lasts 6 months of implementation. It begins with the constitution of the stocks just after harvesting the crops in November-December. The granting of the loans begins in December-January and the reimbursements take place in June-July.

Completion of the project

Local knowledge and expertise on which the project was based: • The stored products are endogenous agricultural products whose production techniques are mastered by the communities; • The communities have a long tradition of storing their crops for the food needs of their households; • The income-generating activities undertaken with the loans obtained are usual activities well known by the beneficiaries. This is an endogenous initiative where ACF has helped to strengthen their capacities. Role of the local administration: • Official recognition of the warrantage groups by the local authorities, granting them a receipt of recognition; • Strengthening the capacities of the groups for their associate life and technical support for production; • Coordination of activities. The groups established leadership and coordination bodies for their activities. At the outset, ACF provided advice while ensuring compliance with the commitments of both parties (micro-finance institution and the warrantage groups). The executive bodies of the warrantage groups (chair, treasurer and secretaries) play a very important role in conducting the activities of the group at in-house level with the members and for the relations with the authors at the local level (micro-finance institution, authorities, technical services...). Monitoring during the first year of implementation by Action Contre la Faim and the micro-finance institution is essential.
The preferred target group was mainly women who are heads of poor and very poor households. The social warrantage as indicated by the name itself is mainly intended for vulnerable households. In some places, the groups are made up of up to 100% of women. For example, in Pama and in two villages of the four municipalities who are beneficiaries of the activity in Gnagna, the membership is 100% female. Thanks to this activity which manly concerns women and children, they have seen their living conditions improve. In some places, the activity has concerned men who are heads of poor and very poor households.
The project addresses the priorities of the communities on several levels, including: • Securing stocks in adequate infrastructures to cope with repetitive climate shocks in these localities (floods, violent winds…) and other hazards (fires, theft,...) and therefore improving their resilience to these shocks; • Avoiding the beneficiaries having to sell off their agricultural products at cut prices because of financial needs; • Enabling the beneficiaries to make use of their harvest for family consumption (cereals) and/or sale during the lean season when prices are highest on the market; • Restoring the dignity of vulnerable people by improving their socio-economic living conditions. ACF has been in the eastern part of Burkina Faso since 2008. This constant presence makes it possible to monitor and capitalise on the changes and lessons learned through our interventions. Furthermore, a study on social warrantage, whose title is: “Analysis of social warrantage and its contribution to building the resilience of households to climate shocks: the experience of the BRACED programme in the municipalities of Pièla and Bilanga" was commissioned in 2017. This study reveals the relevance of this activity in that it contributes to consolidating the resilience of vulnerable households.

Because the warrantage addresses a real need of the communities - securing their crops until the lean season, access to credit for undertaking AGRs, diversifying income sources - the population has been able to take up ownership of the initiative and is now autonomous. The local labour force for the construction of shops and store houses, the beneficiaries, local agricultural products The first social warrantage initiative began in the province of Kompienga in 2013 and is continuing until now. The second initiative began in 2016 in the province of Gnagna and is also continuing.
Changes in the project: • Facilitating access to loans; • Diversification of income sources through the entrepreneurship of other AGRs with the loans; • Facilitating access to food during the lean period, that prevented the poorest and most vulnerable from having to sell their labour in the fields of wealthy owners and be able to focus on their own production; • More access to basic social services (schools for children, health costs,...); • Socially, these loans restore dignity and social consideration, in particular for women.

DRM has seen some progress in Burkina Faso through the adoption of Act 012-2014/AN on the prevention and management of risks, humanitarian crises and disasters, the national action plan for strengthening the capacity for reducing risks and preparing for emergency response, the multi-risk contingency plans for preparing and responding at the national level and in some regions, including the East region where Action Contre la Faim is active. Despite these efforts, there are still enormous weaknesses in DRM. All these policies are not sufficiently applied on the ground. The main challenges faced by the communities are the absence of a system for monitoring, warning and responding to disasters that is integrated from the local to the national level; the weak understanding of the causes of disasters and of the possible measures to prevent or reduce their impact, and the very limited investments made in this regard. The influence of our action in this part of the country in close cooperation with the National Emergency Relief and Rehabilitation Council (CONASUR) and its local representations, has made it possible to draw up municipal contingency plans, to develop a community-based early warning system steered by the Early Warning Committees (Comités d'Alertes Précoces in French - CAP). Other opportunities for future actions are: establishing a contingency fund and stocks near the communities with a high-risk of disaster, for more effective and timely responses, advocacy for institutionalising CAPs and scaling them up, advocacy for regular inclusion of contingency plans (funds/stocks, CAPs, etc.) in the municipal budgets.
CBDRM actions are coordinated at the municipal level by the Departmental Council for Emergency Response and Rehabilitation (CODESUR) and, at the village level, by the CAPs established by Action Contre la Faim. Thanks to the DFID funding (BRACED programme), the capacities of these two structures have been strengthened around various thematic areas for managing risks and disasters (refresher courses on their roles and responsibilities, reducing disaster risks, preparation and response to emergencies, simulation of contingency plans, etc.). Furthermore, CAPs specifically benefited from first-aid training and equipment for monitoring, warning and emergency assistance at the community level. However, the financing of contingency plans is not assured. It is currently the subject of advocacy at the local and national levels.
Long-term financing involves the regular inclusion of preparedness and response plans in the municipal budgets. This is an opportunity for these plans to be taken into account in Municipal Development Plans (PCD, by their French acronym) of the various municipalities. Having more knowledge about the risks of disasters and their related challenges from a social and economic point of view, the municipal authorities have committed themselves to this perspective. The financing of PCDs is generally derived from three sources: the own revenue of the municipalities, the State budget and that of the technical and financial partners.
The BRACED programme implemented by Action Contre la Faim in eastern Burkina Faso has had the merit of establishing a culture among the community's farmers of using climate information thanks to weather forecasts on their mobile telephones, which are very widely available in the farming community. The weather forecasts are broadcast in the form of written and voice messages in the local language. Today, the communities have more knowledge about the causes of disasters and the means of adaptation. The same level of knowledge is also available to local authorities, whose capacities have been strengthened through several training sessions on DRM. The influence of DRM in the local policies and PCDs of a number of municipalities is clearly seen, and others municipalities are preparing to follow the same path. 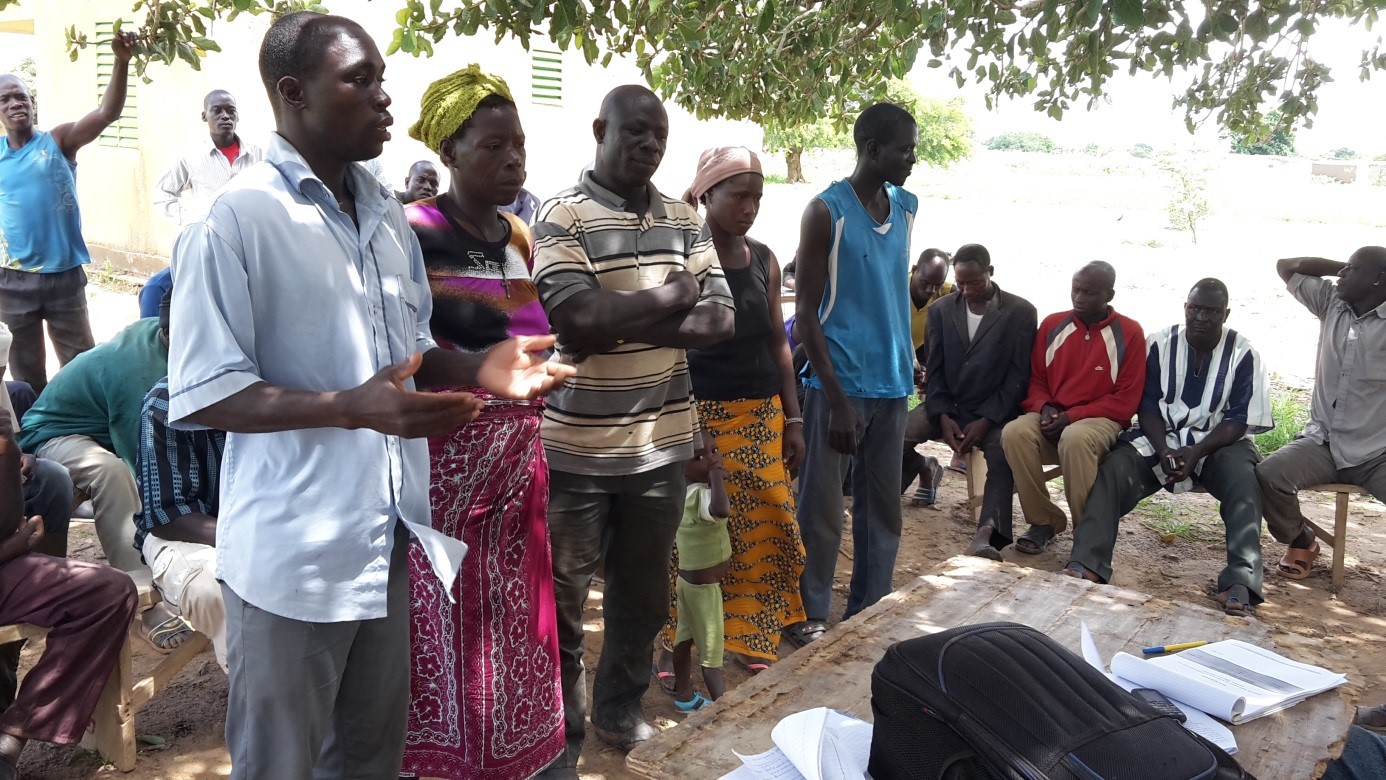