Haoussa-Zongo is a suburban neighbourhood of Lomé, the capital of Togo in West Africa. It grew spontaneously in 1977 as a result of the displacement of populations occupying a slum area in the centre of the city. These population groups were settled in the main bed of the river Zio, on a site that is naturally flood-prone. Unlike other flood-prone neighbourhoods of Lomé, Haoussa-Zongo did not benefit from government projects for creating structures to retain and evacuate run-off water. Its inhabitants, faced with increasingly frequent floods, decided to organise themselves as best as possible to strengthen their resilience at different levels.

The object of our study was to analyse the strategies developed by this community, both at the household and neighbourhood level, to strengthen the resilience against flooding. The outcome of this study has shown that the measures undertaken by the inhabitants to deal with flooding are insufficient and these weaknesses will be taken into account in the project that our organisation intends to set up to strengthen the social resilience of this community. The study, which cost 845,000 CFA and was entirely financed by our organisation (ASEDI), covered three main areas:

It lasted 4 months and was completed in July 2017. It mobilised several stakeholders such as the Village Development Committee (CVD), the neighbourhood chefferie, the neighbourhood inhabitants, the Prefecture responsible for the neighbourhood, and the international NGOs based in the locality, in this case the African Muslim Agency (AMA).

The activities consisted of collecting data through questionnaires, semi-directive interviews and consulting literature referring to the locality. The data were processed and spatialised to better understand the territory’s challenges, relating the social resilience to flooding in the locality.

The inhabitants of Haoussa-Zongo are aware of the vulnerability of their neighbourhood to flooding and have developed strategies both at the household level (by raising the level of the entrances to their houses and of the rooms, by creating outflows from the houses) and at the level of the neighbourhood (by building raised pathways entirely financed by the community). This situation testifies to the fact that the inhabitants have learned from past floods they have suffered and it is those lessons which have led them to develop strategies to strengthen their resilience to flooding, using both reactive (flood disaster management) and proactive approaches. The coordination of the activities to strengthen the resilience at the neighbourhood level is provided by the Village Development Committee (CVD), but the State also intervenes through the Golfe prefecture and agencies such as the National Agency for Drainage and Public Health (ANASAP) and the National Agency for Community-Based Development Support (ANADEB).
CBDRM in Haoussa-Zongo has been put in place and steered by the inhabitants themselves under the leadership of the Village Development Committee. The strategies to strengthen resilience take into account the needs of people who are vulnerable to flooding, particularly women, children, elderly and disabled people.
The purpose of our study was to analyse the resilience created in the community via the various strategies it has developed, and to identify the weaknesses in order to see what could be improved. Without going into the details of our study, we can say that the strategies developed by the community to face and respond to flooding are, to a large extent, driven by the lessons learned from past floods. Much, however, remains to be done to improve this resilience, taking into account climate change.

The strategies to strengthen the resilience to flooding in Haoussa-Zongo are long-term because the site is naturally vulnerable and impacted by the effects of climate warming on rain levels. At each rainy season, the community undertakes measures to reduce the damage by evacuating the most vulnerable members of the population. The community has also invested in a motor-pump that it makes available to households who have suffered from flooding so that they can evacuate the water quickly from the houses and continue to occupy them.
The community of Haoussa-Zongo has understood for a long time now that it must deal with floods at each rainy season. This implies that people are prepared, an essential factor for strengthening the resilience to such floods.

In Togo, we have experienced projects specifically geared to managing risks, such as the Project for Integrated Management of Disasters and Land (PGICT), but our country's DRM laws and plans do not adequately take into account CBDRM.
In the context of our study, the Coordinator of CBDRM actions is the President (lady) of the Village Development Committee, but she generally contacts the State institutions for technical and financial support for the community. She did this in particular to enclose the grounds of the neighbourhood's public primary school, which usually has to close during the rainy season because of flooding. However, the major part of the funding for CBDRM activities relies on contributions from the inhabitants. Such funding, in our opinion, is insufficient to enable them to adequately reduce their vulnerability.
As mentioned above, the fund available to the community to finance CBDRM is exclusively supplied by the contributions of the inhabitants.
The resilience-strengthening projects set up by Zongo's inhabitants have created among them a culture of flood risk management, particularly by establishing an urban governance around the management of such projects. Even though at the school level there is no official curriculum for teaching about flood risks (something we intend to correct when we set up our future project), the children's awareness regarding the behaviour to adopt in case of floods is provided by their household. The fact that the community has acquired a motor-pump to enable the quick evacuation of water from the houses in case of flooding and that they organise public health operations in the locality shows that there is a form of institutionalisation or risk management, even though the government authorities are not directly involved.
Thanks to our study, and as actors in the field of development, we have been able to draw a number of conclusions, particularly regarding the importance of social resilience for the prevention and management of flood risks in African cities. 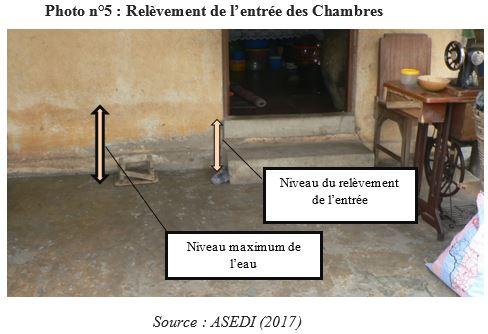