The intervention focused on capacity building in community-based disaster risk reduction and management (CBDRRM), with a focus on upscaling community-based disaster risk reduction and management (CBDRRM) for the Local Disaster Risk Reduction and Management Office (LDRRMOs) in urban context. This is the third component of the “Technical assistance on Securing The Safety Of Informal Settler Families (ISFs) in Metro Manila” program. It was implemented from 2013-2015 by the Disaster Risk Reduction Network – Philippines (DRRNetPhils) under the leadership of the Center for Disaster Preparedness and supported by the Department of Foreign Affairs and Trade (DFAT) of the Australian Government. It aimed to:

This project was implemented in 10 cities, with a focus on 115 villages (barangays) in Metro Manila that are traversed by 8 waterways.

The community people, as represented by the barangay council, homeowners' associations, and at-risk group representatives such as women and the elderly, were greatly engaged in the process of the project completion. This was evident in a series of consultations conducted together with various local government units, civil society organisations and organisations helping the informal settlers in various localities. The national government through the Department of Interior and Local Government (DILG) central office and local government (the city and barangay LGUs) were very much involved in the process since most of the activities implemented were in collaboration with their offices. The activities included inception meetings, courtesy calls to cities and barangays, Disaster Preparedness Seminars, city-level Project Orientation, Flood Drills, Project ISF Launch, commemoration of Earth Day, DILG’s 25th Anniversary, Housing Summit, Barangay Council Meetings, LIAC Meetings, ISF NTWG Meeting and post-CBDRRM Workshop Coordination. The DILG and the Local Disaster Risk Reduction and Management Officers (LDRRMOs) of all the cities covered by the project were also part of the Mid-term Assessment of the project, mid-year inter-agency consultation and lessons learned workshops.
Women, the elderly, children and youth were able to participate in the project activities, such as the Post Tropical Storm Mario Assessment, in all the partner cities. They were consulted and took part in the discussions. They were also part of the Community Risk Assessment, Early Warning System development and the conceptualisation of the Contingency Plan and Barangay Disaster Risk Reduction and Management (BDRRMP) Plan. The Barangay DRRM Committee was also formed and reactivated in some barangays to further cater to the needs of the abovementioned sectors. They also took part in the monitoring and communication of end-to-end Early Warning Systems (EWS) installed in the communities to ensure organised evacuation of people located in high risk areas. They also participated in of flood drills, where emergency "go bags" were distributed. The rest of the communities were awarded with early warning system devices, provided with knowledge products such as hazard maps, comics that provided tips on disaster preparedness, and a toolkit on CBDRRM highlighting the experience of ISFs and urban resilience.
The implementation of CBDRM activities was challenging, especially because it was implemented in the cities and most of the participants are preoccupied with their livelihoods and the barangay councils in different cities have a lot of concerns and activities. Flexibility in the implementation was practiced to ensure that all sectors were engaged in the process e.g. the schedule of activities was synced with the community engagements.

At present, most of the 115 communities still use the hazard maps, EWS, Contingency Plans and BDRRM Plans developed through the project. They have a greater appreciation of the value of community-based approaches to DRRM since they are more conscious of engaging most sectors in the communities in DRR/CCA. This appreciation is also generated by their deeper awareness on CBDRM as a fruit of this project. Most importantly, better DRRM governance was promoted since the council structure was improved, and this has helped them further implement the Republic Act 10121, also known as the Philippine Disaster Risk Reduction and Management Act of 2010.
This project has developed a more positive attitude towards disasters and their relationship with the community. Furthermore, community members were able to identify at-risk or priority areas in the barangay in terms of DRR/CCA. This has also led them to an improved mechanism for disaster response, communication system and protocols. The Barangay councils have also vouched for better support to improve logistics and EWS devices. The community members also had a greater appreciation of the importance of pre-disaster programs pertaining to, for example, livelihood and disaster preparedness and more comprehensive DRRM Plans. The communities also had a more organized DRRM structure that is truly instrumental towards DRRM governance. The project also paved way for the awareness on RA 10121 and budgeting for DRRM in all the communities covered. The Barangay-wide Flood Drill organised through the project also helped the communities become more conscious of disaster preparedness and how to prepare their households in times of flooding. More importantly, the project has facilitated partnership between barangays and LGUs through CDRRMOs, DILG and other agencies, and found avenues for complementation of existing efforts. This is crucial for the sustainability and institutionalisation of CBDRM initiatives at present. It has also revolutionised the process of preparedness governance for it has facilitated the involvement of communities and is no longer just limited to checklist auditing. The project also helped broaden the understanding of and advocated for a more holistic definition of ‘ISF,’ locating it in the context of vulnerability rather that just land ownership. Civil society engagement was further enhanced, since the network led this initiative. It enabled the members to further develop their capacity in project management and foster a stronger relationship and commitment, not just for the network but also for the continuity of the advocacy for community resilience. 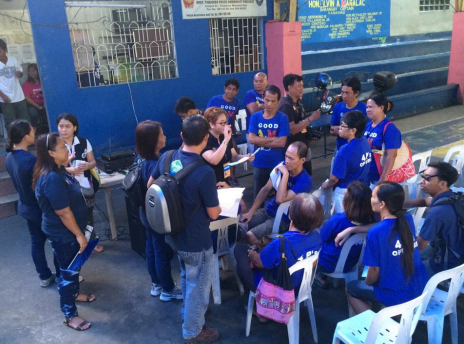