Our involvement in the project came about because each great rainy period sees the loss of human life and serious material damage caused by floods, landslides and erosion; this is the result of sewage blockage because of garbage, an absence of infrastructure for the discharge of rainwater, anarchic construction, and the lack of an urban development policy in the city of Kinshasa.

Our project aimed to contribute to reducing the risks of erosion, floods and landslides in the city-province of Kinshasa in the DRC. The following activities were organised:

The project lasted 5 years (2010 to 2015). The project was funded by several partners (the Municipalities, the United Nations Volunteers programme, the national volunteer secretariat, the Congolese population). 181 other associations of volunteers were involved in the project. The project was closed in December 2015.

The population took ownership of the project, with 4000 people and 181 NGOs engaged in the implementation of the project as volunteers, including 2120 women and 1880 men, of which 3110 were young people (boys and girls). A "Citizen Action Research" (CAR) was organised, enabling us to identify local knowledge and expertise and we were able to use some of them. A project coordination committee was established by the organisations involved in the project at the provincial and municipal level and in the neighbourhoods, under the leadership of CNVOD as the initiating platform for the project. The local administration was seriously involved through the provision of material support (rooms for training, securing the work of the volunteers in the field, positioning waste evacuation skips and providing lorries for transporting the work equipment to the anti-erosion worksites).
In each endangered neighbourhood, we established river committees and anti-erosion committees. The sustainability of the project was assured by the riverbank residents who were victims of floods and erosion and landslides. It was one way of empowering them to manage these disasters, of which they were often victims. 2120 women, 3110 young people (boys and girls). The 181 associations involved in the project included organisations of people with disabilities, albinos and aboriginal peoples.
The local communities were involved in the project, right from the planning stage until its implementation. The selection of problems to solve was done by all the stakeholders involved in this project. Focus groups were organised in the risk areas of Kinshasa city, making it possible to collect data and identify the priority problems to be solved with the community involvement. A monitoring and evaluation system was established and we produced a Monitoring and Evaluation Kit (outcome framework, data collection sheet, calculation base for the monitoring system, indicator information sheets, data collection sheets, roles and responsibilities for monitoring and evaluation). A guide to using the monitoring and evaluation system was prepared and published. The M&E tools made it possible for us to regularly monitor the indicators of the project, and to collect data according to well-defined periods. The data collected enabled us to monitor the changes induced by the projects, learn from the activities and make decisions. CNVOD coordinated this monitoring and the learning process.

The project established the mechanisms for sustainable development, including river committees, neighbourhood committees and anti-erosion committees. We also initiated Voluntary Civic Actions for Sanitation (Actions Civiques Volontaires d'Assainissement - ACIVA), actions that each citizen is called for to carry out at least once a week (every Saturday). These structures consist of direct beneficiaries who are victims of the risks, and they are continuing to function, even becoming more democratic. The people in charge of these committees are now elected every year by the population of the neighbourhood. The participation of women and young people in the decision-making of these committees is a requirement for their existence and recognition. The work is now funded by the contributions of the population. Two years after the end of the project, the volunteers are continuing to mobilise the population in the neighbourhoods targeted by the project. By imitation, other neighbourhoods not affected by the project are also following in the footsteps of their neighbours and organising themselves. ACIVAs are organised every week both in the neighbourhoods affected by the project and in the neighbouring neighbourhoods not affected by the project. It is therefore a habit that is continuing even after the project.
The population is informed about the risks of disasters, the factors leading to disasters and the actions to be carried out individually and collectively to reduce exposure and vulnerability to hazards. It is becoming increasingly aware of the need to reduce the risk of disasters in its environment. This is due to the fact that it has increased its resilience, is voluntarily engaging in responsible behaviour in the face of disaster risks and is able to organise itself before and during the needs periods.

The volunteers and the organisations of the volunteers involved in the project, took the initiative in March 2018 to launch an eco-citizenship advocacy campaign in Kinshasa. The campaign aims to strengthen the capacity of the population to manage their solid, liquid and gaseous waste, most of which end up in the rivers and sewers. The latter have become dumps for all kinds of waste. This situation is the main cause of the floods, landslides and erosion, which plunge the population of the city of Kinshasa into mourning after each big rain. By way of illustration, the rain that fell on the city of Kinshasa in the night of 3 to 4 January 2018 resulted in 47 fatalities, numerous injuries and enormous material damage. That is why we want to launch this project in March 2018, to prevent floods and erosion by raising awareness and educating the population of the city of Kinshasa (on the sustainable management of waste) and by advocating with the public institutions to obtain their help in managing the cleaning of the rivers and gutters and to build the infrastructure for discharging the rainwater. The new project is based on the achievements of the previous project: the mapping of the actors, the river committees, the neighbourhood associations and committees which have been created to ensure the sustainability of the project.
CBDRM legislation in the Democratic Republic of Congo is weak. Our project seeks foster the enactment of policies dealing with these issues that will sufficiently push the boundaries. We are working on an advocacy campaign capable of influencing public policies in these matters. CNVOD and its member organisations are working in contact with local authorities (Chefs de quartier and Bourgmestres of the municipalities) as well as provincial and national authorities and are influencing political.
Coordination is done at 3 levels. There is a coordination in the neighbourhood in connection with the Chefs de quartier and Chefs de rue, coordination at the municipal level in connection with the Bourgmestre (Mayor) and an urban/provincial coordination which interacts with the governor of the city-province of Kinshasa and with the central government. We strengthened the capacities of the Bourgmestres of the municipalities, the neighbourhood chiefs and the people in charge of the municipal administration services, together with the neighbourhood committees, the neighbourhood associations, the river committees and the local development committees on disaster risk management. Given the limited budget, this activity only took place once, in 2011. All these local authorities and the non-state actors had expressed the wish that these activities should be organised on a regular basis. What is often lacking are the technical and financial resources. There are not enough donors in the areas of DRM/CBDRM. Advocacy in this regard with the regional and international institutions is therefore important. GNDR can play a role in this direction. To finance this activity, we used locally mobilised "alternative" funding.
The budget of the Republic of Congo does not take CBDRM into account, although the DRC has been the victim of several disasters over the past 10 years: volcanic eruption, earthquake, landslides, floods, erosions, epidemics. This explains the lack of rapid responses to emergency situations. We are currently advocating with the national government and the provincial governments to ask them to include CBDRM in the State budget. This situation has led us, more often than not, to resort to a self-financing strategy and fundraising from the population. Small sums of money are collected from a large number of people, making it possible to fund as best as possible some of our activities.
The project has changed the mindset both of the population and of the local authorities. The population is beginning to realise the dangerous nature of the disasters and that the authorities have been neglecting prevention. Community members are becoming increasingly conscious that disaster risks can be lessened through community prevention actions when they are associated with those of the State and the technical and financial partners. This explains the massive and unconditional support the project has received, seen in the financial support given to the Voluntary Citizens’ Actions that are organised every Saturday morning. The population now sees the need for advocacy to get the State and the technical and financial partners to support this important sector for the life of the nation. The government (national, provincial and local) recognises the importance and advantages of CBDRM. Voluntary associations and CSOs are being invited by the government (at all levels) to take part in discussions and actions dealing with DRM. It is one of the very few sectors where the government considers CSOs to be undisputed partners when planning and seeking solutions in this area. The expertise of the CSOs is called upon by government each time the need is felt. CBDRM is not yet fully included in school curricula. A few preliminary notions have been included in the civic and moral education lessons, but it is not enough. Further efforts need to be made in this direction. CSO actors have the possibility of influencing public policies and political decisions, because they are stakeholders in the discussions at all levels of governance.
The Bourgmestres of all these municipalities met this requirement by CNOVD. A partnership agreement will soon be signed between the Municipality and the local coordination unit of CNVOD prior to the launch of the project.

Congo, Democratic Republic of the 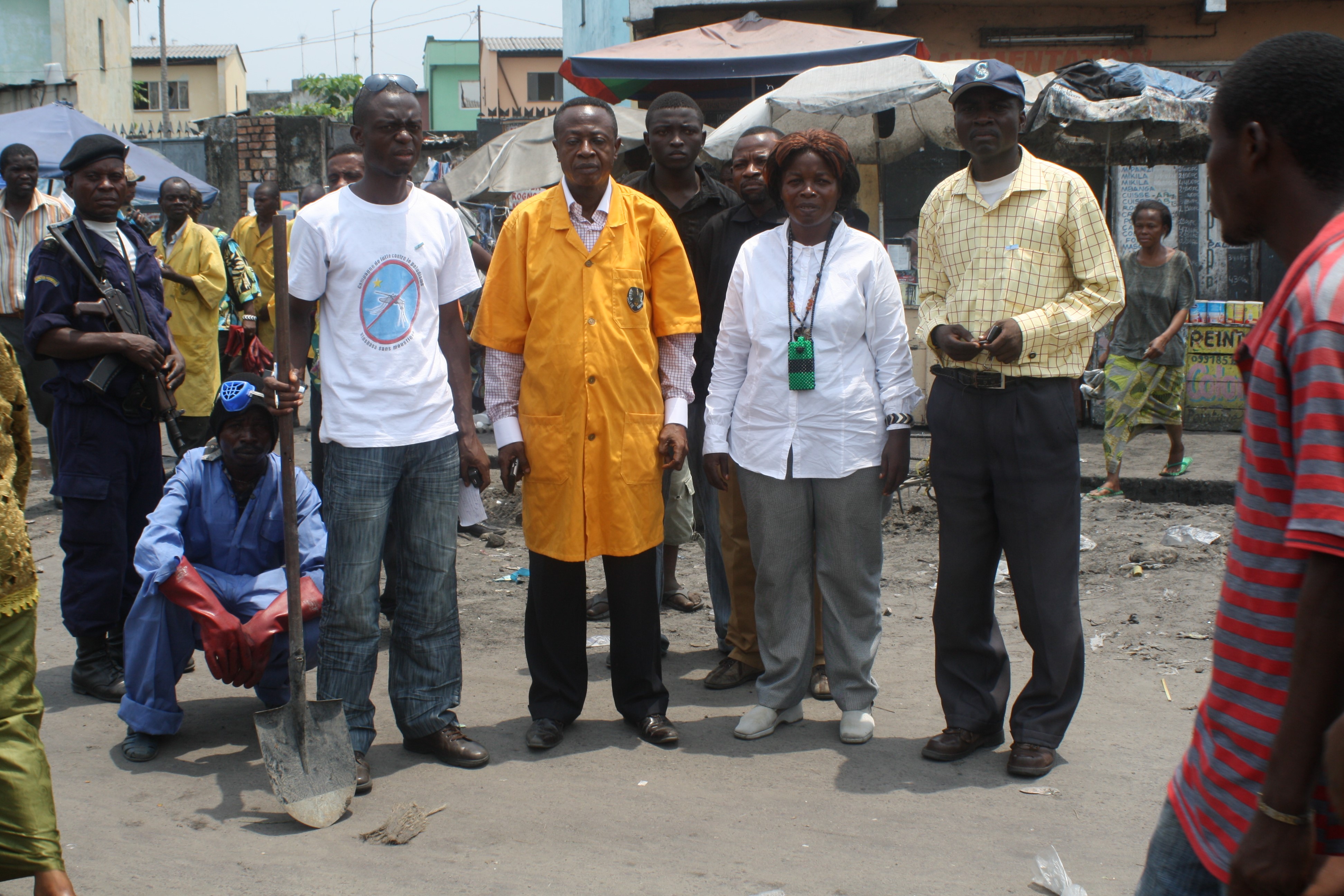