Home Case Studies Participatory and sustainable management of natural resources: the experience of the women of Boussouma

The women of the municipality of Boussouma have very limited access to the land resources they need to carry out their agricultural activities. The observation was made during the sharing meetings and local workshops that APIL had undertaken with the members of this community. From these consultations, it was clear that the men were willing to allow the women to access the land for their investments, but the arid nature of the areas where such activities can take place was blocking their desire to satisfy the women. According to the customary and religious leaders of these localities, any initiatives that could enable the village to have the use of the clearings that would enable them to satisfy the need of the women to have their farming fields were welcome. It is this reality which led the people in charge of the NGO APIL to decide, with the agreement of the whole community, to launch an agro-ecological programme focusing on the involvement of the community in the sustainable management of the land.

APIL organised its intervention around the following activities: support for organising the groups, evaluation of local know-how in the area of sustainable land management, identification of the training courses needed to strengthen the full capacity of the group, selection of endogenous women trainers, and support for providing more agro-ecological equipment. The potential activities to enable the groups to recover the land have been the re-greening of the area’s arable land by planting fertilising trees, setting up vegetated stone barriers, creating herbaceous butts on the land, making the agricultural half-moons and planting glove-gayanis in the fields.

Among the partners who have trusted APIL and who are contributing to its needs, two are more particularly sensitive to the problems posed by the communities of Boussouma. They are the Belgian NGO SOS FAIM and the Canadian NGO, L’ŒUVRE LEGER.

This experience has also been supported by our line ministry, i.e. the Regional Agriculture Directorate for the Central and Northern Region, the municipality of Boussouma and the Permanent Secretariat of the NGOs of Burkina Faso (SPONG).

The project began in April 2008 and was terminated in March 2013. However, the women have been pursuing their activities in a self-sufficient way until today.

The project "Participative and sustainable management of natural resources", undertaken by APIL with the communities of Boussouma, undertaken between 2008 and 2013, focused extensively on leveraging the know-how of the women, to help them find relevant answers to the problem of land degradation. After producing a directory of the know-how of the beneficiary groups, we focused on the local know-how that can be easily adopted by the whole group in order to quickly recover these lands. In the context of the implementation of the activities of the NGO APIL in the municipality of Boussouma, a partnership agreement was signed to ensure that the activities developed fitted with the Municipal Development Plan of Boussouma. This agreement allows the local authorities to undertake field monitoring missions of the women, and also provide them with the support of consultants. These municipal missions have proven essential for the social cohesion of the group and a good understanding between the different parts of the village and capitalise on APIL's interventions in their municipal undertakings. This experiment was carried out by the technical services of the NGO APIL, who had the heavy responsibility of (1) organising and training the groups; (2) monitoring the activities on a daily basis; (3) evaluating the progress; (4) empowering the working groups; and (5) organising the intervention of the relays created and ensuring the continuous self-assessment of the action. Our two technical and financial partners carried out quarterly missions during the project's execution to provide APIL with their expertise and monitor the progress of the work. The customary chiefs have always stood by the women to encourage them in the work. The service agents of the Ministry of Agriculture also provided support for the beneficiary groups to help them comply with standards and technical production routes.
The design of the project for the participatory and sustainable management of natural resources was undertaken with increased participation by the beneficiaries. The collection of basic data on the project (census of the beneficiaries, identification of the areas to be fertilised, choice of the fertilising plants to grow, choice of local support relays, etc.) was undertaken directly by the beneficiary groups. Thus, the know-how of these vulnerable groups was highlighted, which motivated them very much to participate in this project. The beneficiaries of this project were 305 women between 18 and 60 years of age, from the three villages of Sidogo, Tanhoko and Ramiougou. All these beneficiaries were active, voluntarily contributing to the success of the project.
All the beneficiaries were involved in the basic planning of the project. They jointly identified the activities. This enabled us to carry them out with the beneficiaries, without needing to adapt very much. It should however be added that before the land restoration work began, five women received training from APIL. They then decided to train the other women in their groups. It was only after these feedback training workshops that the women began to be involved in community assistance (all the women of the group come to work for one of their number on a given day, then for another on another day, and so on...) to dig the zai, the half-moons, and plant the trees. The women have therefore adapted the new techniques of land recovery to the needs of the local context. The changes arising from the application of these good practices are monitored by APIL's self-assessment and capitalisation tools. The person in charge of the monitoring-assessment process coordinates the monitoring and learning.

The management and training system are the responsibility of the local follow-up mechanism. The leadership of the groups by the project leaders was the key factor for the success of this initiative. Thus, the the fact that the know-how of the farmers in the area of sustainable management of the land had been taken into account throughout the project eventually convinced even those who had been the most sceptical that the project hadn't been imposed to upset the established social order but rather to value them. This greatly strengthened the participation of all in the project. The initiative also survived because the women were determined to benefit from the land they now owned, to produce income for themselves and to care for their children. After 2013, the women continued their activities in a self-sufficient way because they were able to maintain their level of organisation, commitment and community spirit. They now have the technical and financial capacity to continue their activities. The IMSA project (Innovation and Mobilization for Food Security) implemented by APIL has taken into account these groups of women to serve as models for the other women of the project so that the experience can be multiplied. The women have therefore been continuing to carry out their activities since 2013 until now (i.e. 5 years).
The initiative has enabled the women to access new land, to recover the clearings (stony bare soil) and turn them into very fertile agricultural land, to increase agricultural yields more than in ordinary fields, to create new income thanks to the new land, to participate in the financing of the studies and providing for the healthcare of their children. By recovering the clearings, the women and the rural communities of the villages of the municipality of Boussouma have strengthened their capacity for resilience to climate shocks (famines, droughts, floods, violent winds, etc.). Indeed, the women have established food security stocks to forestall the risks of bad harvests. They have been able to produce surplus crops and sell the surplus to the market to support the financial needs of their families. Thus, cash crops such as the cowpea on this land have enabled the women to earn income. The table below illustrates the yields, the quantities harvested, and the sales of cowpea and sorghum produced by the women from 2008 to 2013. Part of the production of cowpea is for own consumption. Own consumption of cowpea represents about 25% of the total production in the northern central region. 75% is sold on the market. Sorghum is intended only for own consumption and for supplying food security stocks. Approximately 350 ha of land were recovered by the 305 women, i.e. 1.15 ha per woman. The group of women from Tanhoko has 120 ha, those from Sidogo 115 ha and those from Ramiougou 115 ha. 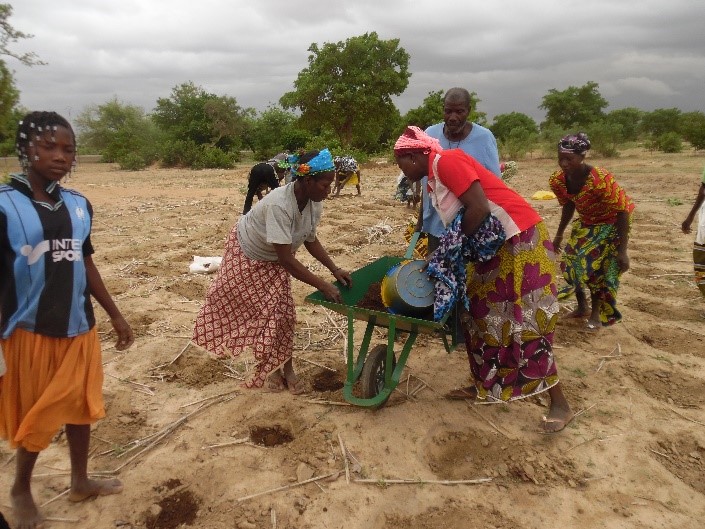