Recurrent flooding in the town of Niamey is a concern for young people, hence this case study focuses on improving disaster management.

Activities included: data collection, flood zone mapping, and training of young people in digital mapping. This study was financed by the World Bank through the PGRC/DU.

The project lasted 4 months and ended in January 2018.

The CBDRM intervention has used local knowledge and skills to identify the areas vulnerable to flooding and to allow cooperation of the affected communities. The role of the administration were to make sure the auditors have access to the population concerned by this survey. The activities were coordinated by the national consultant and an international consultant, as well as two supervisors.
The survey covered all the groups who were vulnerable to flooding. Thanks to the questionnaires, it was possible to survey all the pregnant women, the elderly and people with disabilities. This will make it possible to include all these vulnerable groups in case of crisis.
These activities were undertaken so as to be able to include any changes in the priorities or the context of the community, thanks to a participatory method that made it possible to establish a database of the flood-prone areas and the population exposed to flood risks, as well as implementing an early warning system.

At the beginning, the study was limited to the city of Niamey, but the huge amount of collected data led us to extend the study to the other regions, and even to international level. The study is still being carried on today.
The actors involved are able to currently make use of a database on flood-prone areas, the number of potentially affected people, including expecting women and disabled persons, to give a pertinent answer to flooding. People will also have an early warning system.

It is worth noting that 20 young people have been involved in the study which covered the rainy season and met a number of challenges that were overcome thanks to the team's motivation and determination. 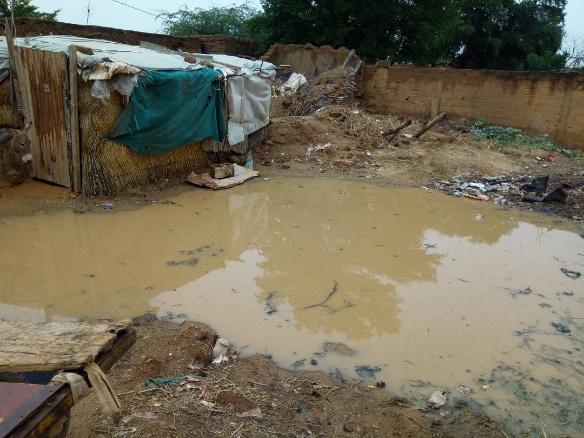