Since 2012, Centro Humboldt has been working in coordination with the Mayor’s Office of Bluefields, located on the Southern Caribbean Coast of the country, particularly on issues related to strengthening the capacities of the local structures of the National Disaster Prevention and Response System, with the El Bluff Community being one of the sites selected to work with the Community Committee for Disaster Prevention and Response (COCOPRED, in Spanish), given that its geographical conditions and economic activities represent a high level of risk.

In November 2014, Centro Humboldt began the implementation of the Project Facilitating Climate Change Positioning and Methodologies in the Southern Caribbean Coastal Autonomous Region, within the framework of the Local Governance Program promoted by Global Communities with funding from the United States Agency for International Development (USAID).

As its name suggests, the project implemented by Centro Humboldt was aimed at developing a useful methodology to help build climate-resilient communities. As a first step, an alliance was formed with a local university named Bluefields Indian & Caribbean University (BICU) and a local NGO (BlueEnergy). The main objective was to share knowledge with local actors and develop a methodology for the implementation of local climate change adaptation plans, flexible enough to be adjusted and replicated in other territories. In this case, the methodology developed by Centro Humboldt was validated in El Bluff Community, but replicated within the municipality by partners in communities of different ethnicities and world views: Ramas, Garífunas, Creoles and neighbourhoods located in the urban sector of the city.

The preparation stage was aimed at establishing a channel of dialogue and communication with local authorities and actors; establishing a Monitoring Committee, which had the role of ensuring the planning of the process; defining which actors would participate, review, adjust and validate the methodology and toolbox; and defining roles and responsibilities of all the people and sectors involved in the whole process. Prior to continuing to the next stage, during the initial coordination, the work of gathering, reviewing, processing and analysing available community information, was important as a preamble to the visit to recognise the risk areas within the community and the development of the base map. The Monitoring Committee was involved in all stages of the process.

The second stage was the assessment, in which a community resource self-mapping system was developed, identifying and prioritising threats, identifying risk areas and applying a participatory assessment of vulnerabilities and capacities. Then, the main livelihoods of the community and the dynamics of how they develop over time and the variations they have suffered in recent years were selected. As an integral part of this stage, the ancestral knowledge of the population was recovered, taking into account that this is a multi-ethnic and multicultural community.

During the canvassing, the third stage of the process, Centro Humboldt used a Regional Climate Model to generate future projections of the community’s temperature and precipitation conditions. This information was presented to the local actors to guide their objective image in the medium and long term. Using the information gathered in the diagnostic stage, they worked on a zoning proposal based on land use planning and began to identify actions aimed at achieving their resilience, taking into account some issues, such as: What do I have to adapt to? What do I have to adapt? Why? How? And what limitations and opportunities do we have? With this information, the next stage, the proposal, was taken forward.

At the proposal stage, a matrix of action plans was developed, establishing intervention strategies for the protection of families and the sustainable development of the community. This matrix was very simple and contained prioritised programmatic axes by sector and livelihood, in addition to having clear objectives and proposals for adaptation measures, as well as timelines, stakeholders, roles and external support required.

Once this stage was completed, we moved on to the last: approval. At this point, the people who participated in the process of developing the plan, led by the Monitoring Committee, had the responsibility to review and validate the document collectively drafted. Then, the Monitoring Committee convened a community assembly to present the final product, which was approved and then presented to the highest authority in the municipality: the Municipal Council. The objective of this action was to influence the authorities to incorporate into the Annual Municipal Investment Plan (PIAM, in Spanish) some of the actions prioritised in the local adaptation plan.

The component within the project aimed at building the local planning instrument was completed in November 2015, with the approval of the Local Climate Change Adaptation Plan for the El Bluff community. However, from that date onwards, the community took valuable action to advance its objectives: 1. For the first time in history, the Municipal Council met in the El Bluff community and everyone participated in a walk to learn first-hand and guided by members of COCOPRED, the areas of highest risk within the community. 2. The community decided that the celebration of the 28th anniversary of the Autonomy (October 2015) would be aimed at promoting the work they carried out to have a local adaptation plan and organised a carnival called "For the autonomy of indigenous peoples and climate change adaptation". This action was funded by the Global Water Partnership, Nicaragua Chapter. 3. As the first activity within the Action Plan, the population census was carried out since, until the approval of the instrument there would be no updated information regarding the distribution of the population within the community. For this reason, in March 2016, the Nuevo Amanecer Institute and the Secondary Night School of the Virgen del Carmen School, were organised and, with technical support from Centro Humboldt, the media and the Municipal Mayor's Office, the community managed to carry out this action. 4. The work with the youth who participated in the Population Census resulted in the interest of forming a group of young people to support the process their parents and teachers initiated: the implementation of the Local Adaptation Plan. That is why, in May, this group of young people was formed with the name "Young people of El Bluff Forgers of the Future: Towards climate change adaptation". They prepared their own draft of the logo that would represent them, and Centro Humboldt with the Graphic Design Team supported them in the layout of the logo. 5. From this same year, the Youth Group has been invited to participate annually within the advocacy forums in the Southern Caribbean Coast Region and at national level in the United Vulnerable Nicaragua Forum for Life, thanks to the support provided by the Nicaraguan Climate Change Alliance. 6. At the end of 2016, Centro Humboldt, in partnership with the Mayor's Office, monitored the quality of water for human consumption in the community, finding contamination in 80% of the sources sampled. This information was documented through a report and formally submitted to the competent authorities so they could proceed in accordance with their protocols, competencies and capacities. 7. In the Annual Investment Plan of the Mayor's Office of Bluefields 2016, actions were included for the strengthening of COCOPRED, the promotion of tourism potential within the community, the installation of 15 ecological latrines in highly fragile areas and the improvement of the infrastructure of Virgen del Carmen School, the latter being one of the centres for shelter in emergency situations. In total, in IPA 2016, 1.1 million córdobas (35 million USD) were allocated for the implementation of actions contemplated within the Local Adaptation Plan of El Bluff community. 8. In 2017, with funding from Voces del Sur, through the Nicaraguan Climate Change Alliance, the community validated the Local Climate Change Adaptation Plan for the Joint Principles for Adaptation. 9. In October of the same year, with funding from VIKES, through a project implemented by Centro Humboldt, a workshop called "Social Communication in Risk Management: Generating a cultural change at the local level" was held. With this workshop, a group of 17 journalists from the city of Bluefields were brought in who, despite knowing the community (because of its beaches, used by local tourists during the summer), were unaware of the risks they faced and the actions they were taking to improve their conditions. As a consequence, permanent rapprochement between the community and the media was achieved, and the media became an important ally in the implementation plan. 10. In January 2018, with financial support from DIAKONIA, Centro Humboldt delivered 50 filters for the reduction of organic contaminants present in water for human consumption, which were delivered mainly to households with newborns, pregnant women, disabled people and the elderly. 11. The Mayor's Office of Bluefields has a Municipal Plan of Good Hope for the families of the Christian, socialist and solidarity municipality 2018-2021. In this instrument, actions aimed at benefiting the El Bluff community are contemplated, including construction of new streets and platforms with access ramps for people with disabilities; improvement of the park that includes benches, kiosks, children's games and free Wi-Fi; improvement of the health post in infrastructure, personnel, medicines and equipment for patient care; improvement of the baseball stadium; construction of a tourist complex in El Bluff Beach; improvement of lighting in public spaces within the community; reforestation of mangroves in the coastal areas of the community; and installation of a treatment system for solid waste and rubbish plants in various locations within the community.

Results of the application of the social audit tool called "Joint Principles for Adaptation (PCA, in Spanish) to El Bluff's Local Climate Change Adaptation Plan. Assessment with the application of the PCAs" include an average result of 2.65, which indicates that the plan includes the PCAs and has great advantages for their effective implementation, in addition to being a well formulated planning instrument where some of the following criteria were highlighted: 1. It is inclusive and participatory from formulation to implementation. 2. It resumes ancestral knowledge. 3. It took into account multi-stakeholders including local authorities. 4. It is flexible and can be adjusted to new contexts. 5. It is consistent with local and national instruments. 6. It is based on current and future evidence of climate change. 7. It recognises the different vulnerable groups. 8. It has a community-based resilience approach. The underlying results of this process include: • ANACC obtained inputs from the PLACC of El Bluff and its inhabitants to feed the Climate Change Draft Bill, which has already been submitted to the National Assembly. • ANACC made a short video that highlights the importance of PCAs to the community. • ANACC has produced a Popular Version of the PCAs and refers to El Bluff's PLACC. • ANACC has taken the people of El Bluff as an example and has developed PLACC in communities of the South Pacific of Nicaragua. 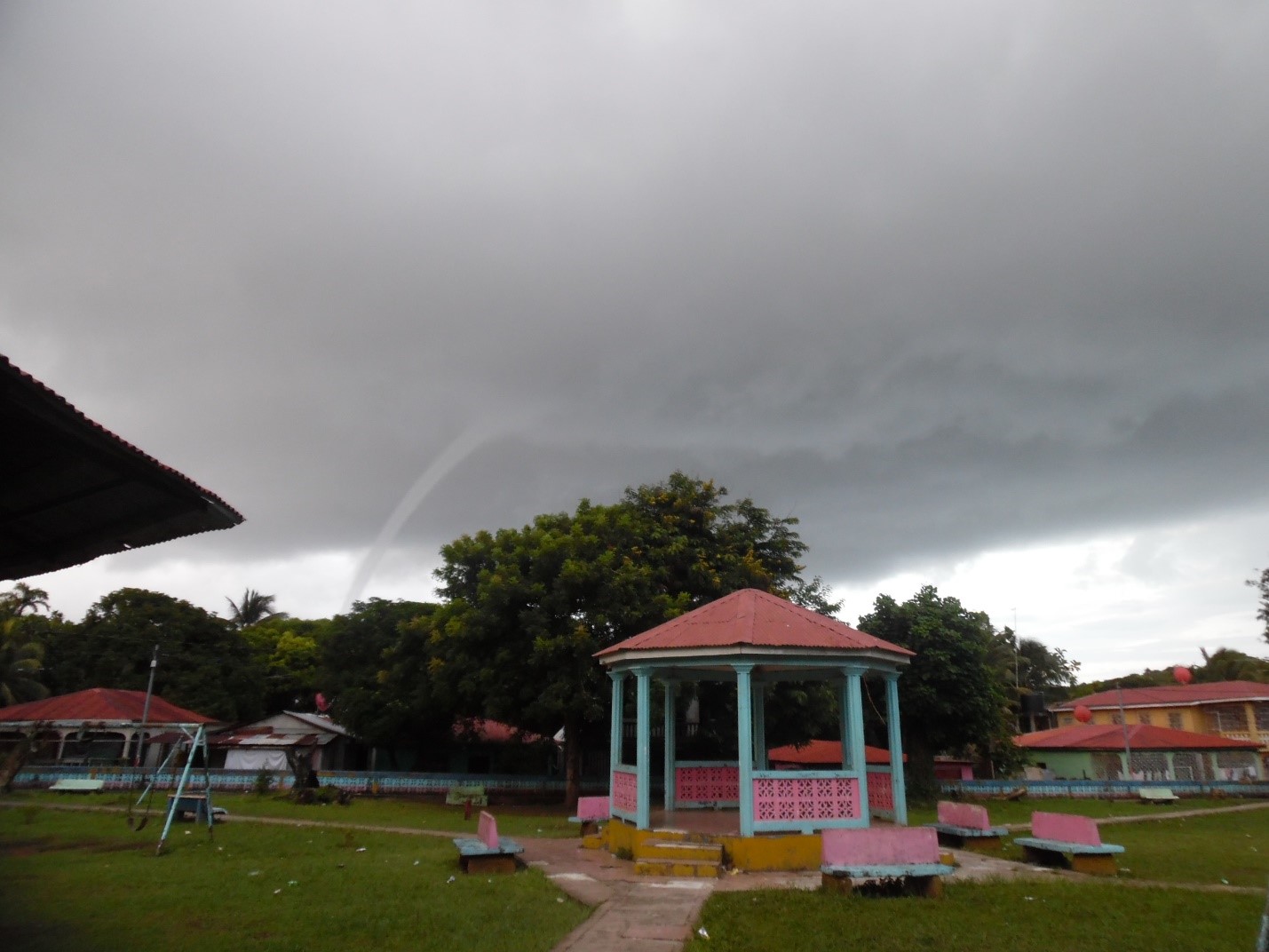