Uttar Pradesh in India is the most populated state of the country but ranks lowest on development indices due to various socio-economic factors and recurrent floods. For generations, the floods have continued to ravage the lives of its inhabitants with unrelenting fury, leaving them in despair. An increase in the frequency of floods has been witnessed over the years, as each monsoon brings with it excessive flooding and misery for thousands located in one of India’s poorest states. Bahriach, Gonda and Gorakhpur districts are located in Eastern Uttar Pradesh, in India. Situated close to the Nepal border, communities along Ghaghra River in Bahraich and Gonda are devastated annually due to upstream rainfall and discharge from tributary streams and dams. Nearly a million people were killed over the last decade by disasters caused by storms, droughts, floods. Some material losses seem to be unavoidable, especially in the case of very large and infrequent events. However, in some cases, the loss of human lives could have been avoided if the proper precautions and measures had been in place.

Early warning systems (EWS) are information systems with a objective to provide information on occurring hazards that might evolve into disasters unless early response is undertaken. Thus EWS helps to monitor the first signs of emerging hazards in order to be able to trigger early and appropriate responses to these first signs and thus reduce or mitigate disaster risk. Effective early warning systems require strong technical foundations and good knowledge of the risks. But they must be strongly people-centred with clear messages, dissemination systems that reach those at risk, and practised and knowledgeable responses by risk managers and the public. People-centred early warning systems empower communities to prepare for and confront the power of natural hazards. Presently, many systems that are able to issue warnings for a number of natural hazards are in place.

However, a frequent problem is the weak linkage between the technical capacity to issue the warning and the public’s capacity to respond effectively to the warning. Moreover, public and community organisations often lack understanding of their risk and vulnerabilities. Hence, preparedness programmes are urgently needed. Poorvanchal Gramin Vikas Sansthan (PGVS) has developed a cross-border community-based early warning system between India (Ghaghra) and Nepal (Karnali) through capacity enhancement and establishment of institutional linkages. The system envisaged developing informal communication channels for communities in India to access early warning from Nepal. CBEWS is a people-centred system that empowers communities to act in a timely and appropriate manner to reduce losses from disasters. It provides information in advance about the future risks to the communities. CBEWS also helps to reduce economic losses by allowing people to better protect their assets and livelihoods. There are river stations in Nepal established primarily at Chisapani, Chepang and Kusum. PGVS, supported by Practical Action, established a Digital River Monitoring Device that gives real time information about the level of Ghaghra River (Karnali River in Nepal). PGVS and the Panchayats have established early warning electronic river display systems in Bahraich (in Girgitti village of Mihipurwa) and Gonda (in Pure Baloo village of Nawabganj). It is linked to the Nepal hydrology and meteorology departments through the internet for monitoring of upstream rivers like Karnali (Ghahgra in India) and Babai (Saryu in India). Warnings must reach those at risk.

Community-based early warning systems (CBEWS) rely on the direct participation of those most likely to be exposed to hazards. Without the involvement of local authorities and communities at risk, government and institutional interventions and responses to hazard events are likely to be inadequate. A local ‘bottom-up’ approach to early warning, with the active participation of local communities, enables a multi-dimensional response to problems and needs. In this way, local communities, civic groups and traditional structures can contribute to the reduction of vulnerability and to the strengthening of local capacities. Institutional arrangements and warning communication systems need to be tailored to meet the needs of every group in every vulnerable community and to establish last-mile connectivity. PGVS is running CBEWS in 2 districts – Gonda and Bahriach and 3 subdivisions (tehsils) – Nanpara, Mahisi (Behriach) and TarabGanj (Gonda). There are 16 Gram Panchayats and a total of 95 villages. According to the 2001 census, there is a population of 54,520 comprising of 28,350 men and 26,169 women. The three rivers in these two districts are Ghaghra (Karnali in Nepal), Saryu (Babai in Nepal) and Sharda (Mahakali in Nepal). There are 16 village-level Disaster Management Committees i.e. in each Gram Panchayat. Each Village Disaster Management Committee (VDMC) comprises of the Village Pradhan, Junior Engineer, Lekhpaal, Asha and Aganwadi workers. It is essential that communities understand their risks, respect the warning service and know how to react. Gram Task force members & VDMC members were trained on community-based early warning processes, first aid and light search and rescue. They use local resources and materials to save lives in their area. Various types of warnings issued by Gram task Force (GTF) members for saving lives and livelihoods: 1. Warning 1 (When the river bed is full) - During the first warning, the villagers are requested to keep their food and fodder at higher and safe places. They are also requested to arrange for ration for 5 days, dry food for 2 days and essential clothes and utensils. 2. Warning 2 (When flood water starts coming into agricultural fields) - The second warning requests the villagers to collect rations for 5 days, dry food for 2 days and essential clothes and utensils and to be ready to evacuate their village. They should also ensure that their livestock is in a safe place. 3. Warning 3 (When the flood water starts entering the village) - The 3rd warning requests the villagers to evacuate from the village and to seek shelter at higher and safe places with food, clothes and necessary. Clear messages containing simple, useful information are critical to enable proper responses that will help safeguard lives and livelihoods. The use of multiple communication channels is necessary to ensure as many people as possible are warned, to avoid failure of any one channel and to reinforce the warning message. Vertical and horizontal communication and coordination between early warning stakeholders should also be established. Reading of the upstream river level is done through the digital river monitoring device at display station. If the village river gauge shows water on white, yellow or red lining, this information is communicated to the Sarpanch who declares warning after discussion with Gram Task force (GTF) members. Later he communicates with other clusters and GTF members using local systems issue warnings in the village.
The objective of people-centered early warning systems is to empower individuals and communities threatened by hazards to act in sufficient time and in an appropriate manner to reduce the possibility of personal injury, loss of life and damage to property and the environment. A complete and effective early warning system comprises four inter-related elements, spanning knowledge of hazards and vulnerabilities through to preparedness and capacity to respond. Best practice early warning systems also have strong inter-linkages and effective communication channels between all of the elements.
This comprises participatory vulnerability and capacity analysis (PVCA) methodology. This methodology provides a framework analysing vulnerability and capacity to adapt to climate change at the community level. Recognising that local actors must drive their own future, the PVCA prioritises local knowledge on disaster risks and adaptation strategies in the data-gathering and analysis process. It includes tools like social mapping, resource mapping, wards vulnerability mapping and seasonal mapping. This also includes formation of task forces. Task forces are entities formed and activated to work in groups, focusing on issues such as early warning, dissemination and coordination, search and rescue, and shelter management. The task force members have selected villages and established community-based early warning centres. The task force meets on a regular basis and prioritises the risks prevalent in the village for three months with roles and responsibilities, timeline, process and date of follow-up. Warning services lie at the core of the system. There must be a sound scientific basis for predicting and forecasting hazards and a reliable forecasting and warning system that operate 24 hours a day.

Thanks to the CBEWS, warnings are issued timely, hence evacuation is possible. To reduce the impact of floods, the flood centre at Tehsil establishes connection with Gram Panchayat. PGVS is also providing Master Training on lifesaving skills to Village Development Committees. The biggest problem is that people do not move from flood areas. There is a need for public awareness. Also information on disasters should be included in the school curriculum at an early age. Master Trainers should conduct life saving skills training in inter-colleges and degree colleges. Students can become an important medium for further enhancing capacity of the villagers. Information and education material should be printed in easy language for villagers to comprehend. There is need for generating awareness amongst the women on DO’s and DON’Ts. Mosques and Temples can also serve as important venues for dissemination of information on disasters. CBEWS has helped in a big way in providing timely and accurate information in the rural areas. Ram Naresh is the Gram Task Force President and River Guage observer at village Babamela , Gram Panchayat Majha Dariya Burd of Shivpur block in Bahraich District. On August 14th , 2014, the water level started rising. He immediately coordinated with Puttilal ji, GTF president of Gram Panchayat- Maikupurwa. Warnings were immediately disseminated to go to higher land. Earlier when CBEWS did not exist, floods used to cause havoc. Now even the cattle are shifted to higher grounds. Hence, there was no damage. They have also saved one person from drowning with the help of floating ring.
PGVS conducted a threshold analysis of the Ghaghra and Saryu River under the facilitation of Practical Action team. It gives clear information about the availability of appropriate lead time before evacuation. 45 communities have done flood threshold analysis for availability of appropriate lead time before evacuation. PGVS has set up 16 well-equipped community-based information centres in upstream and downstream at villages in operational areas. These village level centres are linked with the District Disaster Management Authority (DDMA) office, river barrages and Nepal Radar. In all centres, the names of government officers with their respective departments and telephone numbers are displayed. The PGVS office in Lucknow acts as a national coordination office. This centre disseminates flood-related information through voice and text messages to significant government departments, private sector and humanitarian organisations and Gram Task forces. 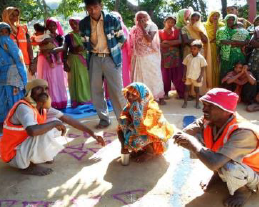