Coastline changes induced by erosion are processes that take place over a period of time. They may occur in response to smaller-scale (short-term) events, such as storms, regular wave action, tides and winds, that may significantly alter sea levels (rise/fall) and that cause coastal land subsidence or emergence. Hence, most coastlines are naturally dynamic. But human activities along the coastline such as salt ponds and shrimp/fish ponds in combination with these natural forces result in rapid changes in the position of the coastline and threatened communities nearby due to fast abrasion.

This is what happened in Demak, Batang and Cilacap in Central Java, Mataram City, West Lombok, in West Nusa Tenggara and Aceh Jaya, often exacerbating coastal erosion in these three locations and jeopardizing opportunities for coasts to fulfill their socio-economic and ecological roles in the long-term. The growing of salt ponds and shrimp/milkfish ponds in Demak, Batang and Cilacap within coastal areas have increased interest in erosion problems.

PMI recruited and trained village volunteers (SIBAT (CBAT or Community Disaster Action Team)). The CBAT conducted assessments on vulnerability and capacity with each of the village communities in Demak, Batang & Cilacap. The communities with active participation of women took the lead in identifying and prioritizing actions to reduce their risks. Local government officials and other stakeholders were also invited to participate in the VCA. The process of conducting VCA has promoted community self-reliance and resilience by sharing local coping mechanisms and knowledge to take collective actions for short, medium and long term priorities for making communities in the three villages safer. The analysis of the information gathered and validated during the VCA process reflects the root causes of risks identified by each of the communities which are translated into actions for transformation. In all the communities, the interventions primarily revolved around alternative livelihood-generation programmes such as crab cultivation, honey bee farming, indigo, milkfish and processed mangrove fruits products of cakes, sweet toffee/dodol, and syrup. In Western Lombok, blue carbon measurement became the added value of coastal vegetation planting. The beneficiaries of these alternative livelihood initiatives agreed that a portion of their profits would be contributed to a community revolving fund which could be used for risks reduction measures identified by the community. SIBAT and communities have also conducted small-scale mitigation by planting coastal vegetation (mangrove/casuarina). Village regulation related to coastal protection have been developed for each of the communities. Apart from contributing to alternative livelihoods, the trees would add to the greenery and improve the living conditions in the future. Various trainings imparted to each community also helped build their capacities and led to empowerment of communities. A Mangrove Education Centre was built and visited not only by students from school/universities but also international institution such as the AHA Center, National government (Ministry of disadvantaged villages), communities, etc. The process of VCA made the communities realize that though all priorities cannot be taken care under the ICCR-DRR programme, they themselves can play a vital role in advocating for change and influence the process of development in their locality especially in getting support from local government. In Demak District, local government support is enormous: the district government handed over 2 boats to support mangrove ecotourism activities. PMI as the implementer coordinated and worked closely and intensively with government, universities and the private sector, through regular meetings, especially DRR activities, where PMI always communicated with BPBD, ICM with marine and fishery services, the environment agency, and the cleanliness service for activities related to waste management. Coordination can be done at the district/city, provincial and national levels. Importantly, the VCAs led to the realization among the communities who have understood that reducing risks of natural hazards is a long term intervention where multi-stakeholder collaboration is essential. This requires a shift in mindset from disaster response and preparedness to risk reduction.
The program works in the coastal area, which is generally inhabited by fishermen groups, thus the approach taken by PMI to strengthen community capacity, increase education awareness and economic improvement for the fishermen community. Mangroves, for example, in addition to protecting coastal area, absorbed mercury and stored carbon and economically benefited local community livelihoods. The mangrove education centre and ecotourism would be beneficial both educationally and economically. Women, children and marginal groups are the main focus of the program. The women and children participated in the process of risk analysis, implementation and also evaluation and sustainability. In disaster response simulation activities, all in the marginalised groups were fully involved, especially elderly women without family, pregnant women, people with psychological disturbance, etc.
Not all regions have the same risk, thus the approach was based on local context. In Aceh for example, the focus was on earthquake and tsunami, while Central Java's focus was on abrasion. Existing knowledge and understanding must be prioritized and delivery of awareness messages including behaviour changes. Monitoring is done regularly by the district PMI assisted in coordination with the province PMI and PMI HQ for guidelines. Progress monitoring was conducted to measure target achieved and to identify outcomes, and give a good impact for communities.

Based on the ongoing process, the program is very likely to be continued in similar areas, increasing the amount of coastal vegetation, from the previously successfully planted 1 million plants with similar components and approaches. Continuing to involve SIBAT and communities and also local government in program management is the key to this success. After the program closed in December last year, many communities, institutions, and local governments have visited and continue learning through the ICCR - DRR program such as through the Mangrove Education Centre and livelihood alternatives. The Government of Aceh Jaya will take over and sustain the mangrove and community-based safer and resilience program by including the grand design of the Mangrove Program into coastal restoration programs funded by the government. It will be included in the development plans and regulations. Along coastal Aceh Jaya, the worst affected areas of the 2004 tsunami will be protected by mangroves. The government of Demak District and representatives from the private sector such as Toyota, and PT Nasmoco supported SIBAT to sustain and to develop the Reduksi (Mangrove and Silvofishery House) and became center of community for mangrove and livelihood education.
2 weeks ago, when floods hit Demak, trained SIBATs were involved in the central government's response operations. The SIBAT of Demak was mobilized by the head of District to support the government of Brebes to help the victims of flash floods and landslides. When the earthquake occurred in Pidie Jaya, Aceh Province, the SIBAT program area was actively involved in rapid assessment, logistic distribution, public kitchen and health services. Besides, efforts to strengthen the environment also continues to occur, mangrove education centre continues to grow, awareness of coastal protection also continues to improve. This is reflected from two large companies (PT Bhimasena Power Indonesia and PT Toyota) replicating similar programs in the Batang and Demak regions. At the village level, the village head has dared to allocate village funds for disaster preparedness activities, to buy hauling cars for sick people to be transferred to the nearest PUSKESMAS.

This program integrates DRR, coastal management, climate risk and solid waste management, involving the community, PMI, and local government, and assisted by universities; this is an attractive cooperation model for PMI in future ICBRR.
The program, which was implemented in 27 villages across 6 districts (Aceh Jaya, Batang, Demak, Cilacap, Mataram City, West Lombok) and 3 Provinces (Aceh, Central Java and West Nusa Tenggara), has provided valuable lessons for PMI NHQ. This program has become the best model for replication in other regions. The partnership model developed with government, NGOs and the private sector is the best model to be replicated to other regions. The program also encourages CBAT members to assist village heads to develop PERDES (Village Regulation)/PERLUR (Kelurahan Regulation) related to community participation in maintaining and preserving mangroves, maintaining environmental cleanliness from garbage as well as obligations for residents to work together to protect the environment - safe, comfortable, clean, healthy and green. At the national level, the PMI NHQ uses a successful learning model in the area of the program to encourage review and review of government regulations and the Disaster Management Act especially related to community participation and private sector. PMI NHQ has encouraged and advocated for BNPB to review the criteria and indicators of resilient villages and resilient communities. PMI NHQ also participated in developing the National Work Competency Standard, especially in the field of community development.
The village head is assisted by the SIBAT, forming a community-level DRR platform. The DRR platform is a platform for discussing, planning and developing programming related to DRR, CCA and the SDGs. SIBAT who have been recruited, trained and nurtured by PMI and the village or village government become the coordinators and managers of the CBDRM program. At the village/kelurahan level, DRR committees also form the parties discussing and approving program plans, budgeting and supervision. Implementation is carried out with full participation of the community. The role of SIBAT is to facilitate the process of risk assessment, planning and directing the implementation process in accordance with the expected objectives and outputs. The NHQ PMI is supported by donors providing partial funding support, while the rest of the funding is fulfilled by the government as well as the communities. The private sector also helps the development and expansion of covered areas. The government and the community allow the use of their land for mangrove planting and development by signing MoUs or Statement Letters. SIBAT and communities receive support for capacity building from PMI NHQ, PMI Province and PMI District. Support for capacity building is also obtained from the government and the Bandung Agriculture Institute.
PMI's main target in facilitating the CBDRM development process is how SIBAT as the village volunteer is able to facilitate and assist the head of village to gain access to village funds from the government. In addition, SIBAT will continue to assist the development planning process at the village level using data bases and risk assessments obtained through the VCA, Risk Mapping and baseline survey processes. SIBAT also has experience in helping facilitate MUSRENBANG (the process of developing a bottom up development plan) and guarding the development plans at village level based on CBDRM/DRR to get approval and funding from village funds and local government budget sources. If the MUSRENBANG process and access to village funds can be done and guarded as well as possible, then of course the CBDRM program will become a routine and sustainable program.
The CBDRM Coastal Program has greatly influenced the SIBAT members' patterns and the village government in particular the mindset and openness in integrating risk management in rural development. The mangrove program has also built collective awareness and reestablished a culture of preserving the coastal environment to protect its territory from abrasion, tidal waves and tsunamis. This program is also the best model of how to use mangrove to be developed into alternative sources of livelihood and cultivation of crabs, shellfish, shrimp, etc. Some alternative sources of livelihood such as processing mangrove fruit into food and pastry products, as well as the development of mangrove honey becomes an interesting thing for the wider community that various benefits can be obtained from mangroves. SIBAT Demak will develop a mangrove pond in its mangrove area for artemia cultivation of phythoplankton as shrimp food with high economic value. The role of SIBAT as a community motivator is increasingly gaining recognition from both citizens, government and local parliaments. CBAT became a citizen spokesperson in conveying aspirations and advocacy to the local government and parliament to get support and facilitation of development in its territory. The large number of schoolchildren and students learning about mangrove conservation and coastal restoration is a consideration and reference that the CBDRM program can be a natural laboratory and inclusive education to learn directly in the field. SIBAT can be a partner of the local government and parliament to build a village based on Integrated Risk Management/DRR/Resilience. 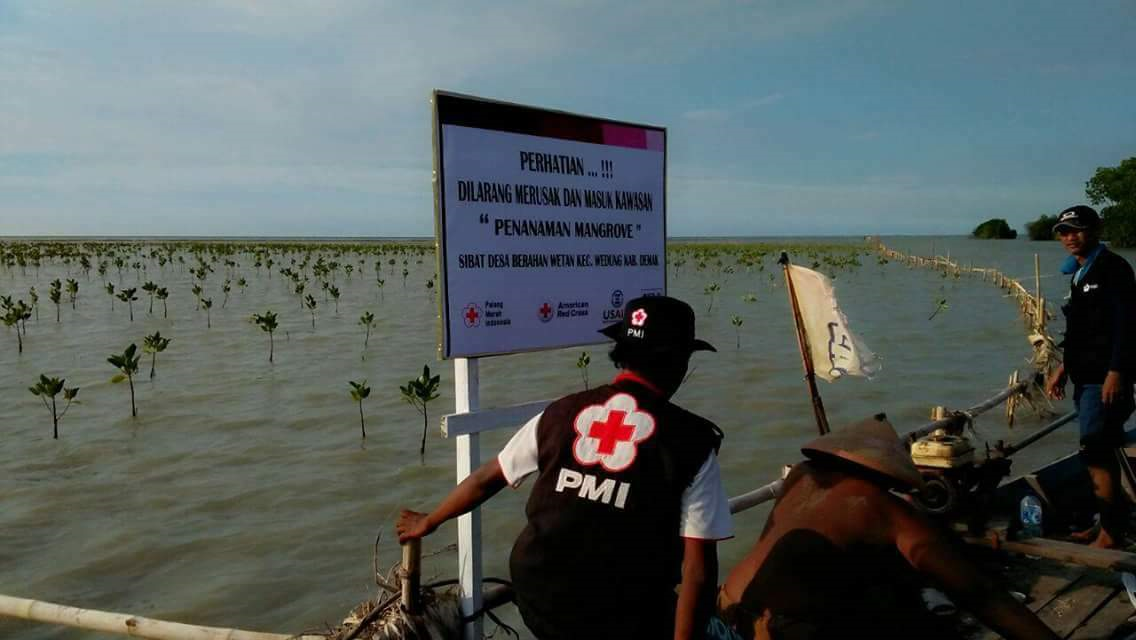