Home Case Studies The Early Warning Committee (CAP): a local permanent watch unit for better managing the risks of disasters: The cases of Koalma and Tibtenga

For more than 10 years, the villages have been suffering from floods, droughts and diseases which are putting a great deal stress on the lives of the producers.

ATAD’s support for managing disaster risks at the village level has enabled them to understand the need to work on preventing and reducing the risks.

With the financial support of its partners, Diakonia, Oxfam and Christian Aid, ATAD has extended the strategy to the villages that have been identified for support.

The decentralised technical services, the local authorities, the village leaders (religious and customary) and the other support organisations have supported the idea in the village.

For two years, the support has enabled the population to be better organised to avoid situations of degradation of their living conditions. Starting in 2014, the village has been able to keep its Early Warning Committee (CAP) functional until today.

These CAPs have been producing radio programmes, organising general meetings for sharing information with the community, and generating the use of the data for cultural activities.

To be more effective, the members of the CAP have been involved in the collection of local data, which is enabling the decentralised services to monitor the evolution of the situations of the seasons, attacks on crop predators, outbreaks of animal diseases and other phenomena. Endogenous meteorological knowledge is used to inform the populations.
The CAP is composed of women and men from the vulnerable populations receiving support. With the support of ATAD, the communities are organising themselves to designate representatives, based on jointly defined criteria (volunteer, permanent availability, at least 1 member must be able to read and write, etc.). On this basis, the CAPs are composed of 5 to 10 members, including both men and women, depending on the villages. With the new DRM projects aiming to protect children, children have been either included in the CAPs or specific children's committees have been created. The implementation of their actions has involved observing signs, collecting data in connection with the early warning system, analysing and interpreting. For example, for local signs, the CAPs are using endogenous knowledge that involves the elderly. The information obtained is shared by all the members of the community by means of traditional and modern communications systems and channels.
Consisting for the most part of persons who are not educated (only literate), ATAD has made available tools in their language. Networking actions have been established to create a synergy of actions. With the national weather service, an accessible messaging system has enabled the CAPs to obtain weather and climate information. With a view to ensuring that the action is sustainable, ATAD has been working to bring the CAPs into contact with the members of the Departmental Council for Emergency Relief and Rehabilitation (CODESUR), involving competent technical services. The experience has been shared with the municipalities, all of which have come on board with the idea of increasing resilience. To facilitate monitoring and sustainability, recommendations have been made to the municipalities for the adoption of measures to institutionalise the existence of CAPs as a subcommission for the CVDs. The village and the municipality are currently benefiting from very effective support for managing the risks. This organisation, which constitutes the first level of a risk management mechanism, puts the population on the front line and allows for monitoring by State structures, which usually find it difficult to find the right information that will enable adequate treatment. If all the localities could avail themselves of this, the country as a whole would be better prepared and protected. The municipal level, which is decentralised, is well placed for coordinating the activities of the CAP.

The willingness of the people of the village to adopt conditions for a better existence means that the group is receiving the support of the village population and being listened to by them. The work is undertaken on a voluntary basis. The members of the Committee are dedicating themselves to satisfy their conviction that it is important to be involved in the development and security of their local communities. Since the first two years of close monitoring (2012-2014), the unit has been looking for information to build a strong resilience and also for the means to consolidate the gains acquired when implementing the activity. The desire for more extensive effectiveness has lead to a search for efficient means and tools for disseminating information, such as radio, short messages via mobile telephone, etc.
All the inhabitants are attentive to the messages broadcast by the unit, and everyone is referring to the information provided by the unit to choose the right crops and the right moment for putting the seeds in the ground.

The rapid responses to floods, or crop attacks, or sudden surges in the prices of food on the market have convinced the population of the beneficiary village that the survival of the unit is a means for enabling them to be more protected from bad situations. These observations have not only facilitated the acceptance of the unit, but also the involvement of the other inhabitants in seeking ways to ensure the sustainability of the action.
Burkina Faso has a law on disaster management (Act No.012) which should, in its application, be provided with a coordinating instrument at all levels. The participation of the populations in managing risks is more than necessary if we want to see more results and to continuously monitor the evolution of the indicators. Workshops have made it possible to validate the need for such a group in all the village entities, to ensure that risks are managed in real time. The decision-makers at the departmental or municipal level are seeking ways of formally recognizing the structure. In the area that suffered the serious consequences of the floods in 2010, all the villages potentially able to receive support have been able to do so and gladly so, because they are realising that they are more advanced than the other villages in terms of risk management.
The national structure dedicated to managing emergencies has been involved in supporting ATAD to establish this unit. This has enabled the decision-makers to understand the techniques that can help them to manage a crisis related to the effects of increasingly recurring hazards. 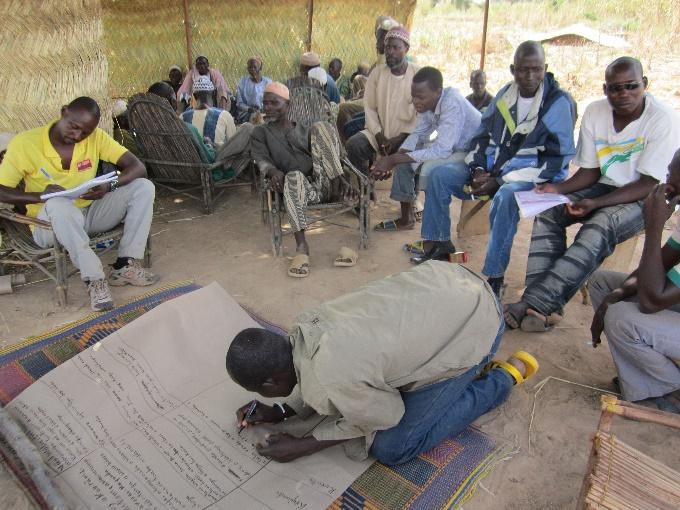