Home Case Studies Protection and Restoration of the Féri-Féri Hill

The intervention involved restoring the Féri-Féri hill and its slopes (80 ha) whose run-off waters flow down into the neighbouring urban municipality of Tillabéri. The neighbourhood was flooded in 1993 and 1995, with major damage to the fields and even a number of houses collapsing.

The second objective was the creation of green jobs through integrated management of natural resources.

For the production of plants and creation of anti-erosion works, ADPE Bonferey received PAC II financing from the World Bank in 2010.

The communities took ownership of the CBDRM intervention, respecting the appropriate site management measures and benefiting each year after the winter period from the management and use of dry straw and the grazing of big ruminants in the space made available for this purpose since the end of the project in 2003. The Bonferey group drew on local know-how by involving the local leaders, the herders and the occult sciences practitioners who had been managing the site before it moved to other owners. The local administration has contributed a lot by acquiring the land, providing the land management paperwork and the search for funding. The activities were coordinated through a 5-year action plan which involved all the previously mentioned stakeholders and the coordination was provided by the Bonférey group.
The grouping has 50 members, including 38 women, who are actively involved in the management of the activities. The Bonférey group shares the resources coming from managing the site with the whole community. To be able to make use of the resources generated by the CBDRM activities, each Bonférey member pays 15% to the group and non-members pay 50% for the use of dry straw, wood from pruning, herbaceous and ligneous seeds, and possibly arabic gum in a few years time. The first chair of Bonférey is a person with loco-motor disability.
Our activities are fully in line with the municipal development plan because they are compliant with point IV of the municipal plan as well as with the priority actions and investments programme in the environmental sector. In addition to the executive board we have 4 teams: • The support, advice and training team (the team trains the members in making anti-erosion works, herbaceous and ligneous seeding, plant production, etc.) • The stakeholder discussion forum • The Bonférey youth council (girls and boys between 7 and 25 who are the children of group members and are being prepared to take over in due time) • The team dedicated to mechanical anti-desertification measures • The team dedicated to biological anti-desertification measures

We believe our initiative has been successful because we have been able to reduce the impact of the run-off waters and make the hill green again just with locally available means. Prior to starting our actions there was less than 1 tree per hectare and the plant cover was less than 2%. Today we have over 200 trees per hectare and a plant cover in excess of 80%. Over 50 jobs have been created, and several animal and plant species have returned. In addition, 70 tons of straw and animal feed were produced and managed in 2017. We also started producing certain plants used in traditional medicine. A lot of wild fauna has returned to the hill.
Despite the advanced deterioration of the site, which had left the land mainly stony, we have been able to turn the desert into a forest in the space of a few years. The population is able to benefit from exploiting the natural resources available, thanks to the actions of Bonferey group which shares the resources through a rational management of dry straw, urea-treated straw, acacia radiana pods, Senegalese acacia seeds.

Bonferey is a local organisation which has a clear vision for the sustainable management of local resources, as witnessed by the actions it has undertaken over the past 20 years and by preparing young people to take up the torch. 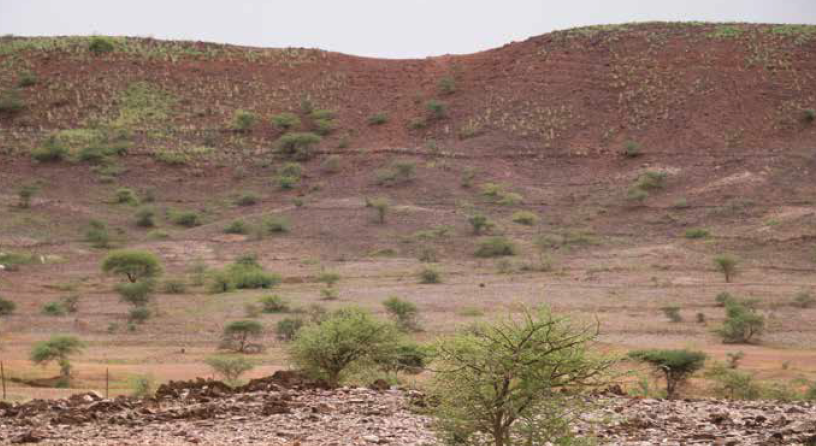