The objective of this initiative was to contribute to the training of communities in terms of how to respond to emergencies and, in order for each training to be developed, community members must be involved from planning to implementation. The activities were mainly grouped into a two-day boarding school system for the participants, where various techniques for emergency response at the community level are discussed.

Funding has been primarily associated with World Vision’s Emergency Preparedness and Response funds for special projects in conjunction with the participating communities.

First responders from each community, such as fire fighters, policemen, etc., are involved in each training, as were social organisations like churches, neighbourhood councils and schools, depending on the occasion.

The project starts in 2013 and is still ongoing. It does not have direct funding but, since its action is based on a Volunteer Corps of Trainers, it is possible to continue with the implementation of this initiative whenever it is requested by an organised community.

Specifically, we can highlight an urban experience with the Neighbourhood Committee of Pedro de Valdivia Bajo in Concepción, and a rural experience with Pehuenche communities in Alto Biobío.

In each training, the planning, as well as all the details of the logistics and execution were reviewed with the participating community, adjusting it to the local requirements and capacities. For example, in the training with the Pedro de Valdivia Bajo Neighbourhood Committee, the modules were adjusted to ensure response to cases of lack of pre-hospital care for the population. In the case of Alto Biobío, the information in the modules was translated into the Pehuenche language, and ancestral customs were included to promote autonomy and emergency preparedness. In all cases, there was coordination with the authorities, leaders and local emergency networks for the execution and drills that were developed in each training.
Since its design, the First Responders in Emergencies training has included the Child Protection approach, as well as the inclusion of minorities in its implementation. There are no pre-established limitations to participation and this has allowed various people to take part in the training.
Each training is planned and contextualised to the reality of each community, especially in relation to the type of risk to which it is exposed. For example in Alto Biobío, a specific module on volcanic risk was delivered by geographer professionals, incorporating the Pehuenche worldview in the approach of this topic.

The First Responders Training has continued to be conducted as requested by communities that are aware of the experience and are committed to their emergency preparedness, recognising themselves as priority actors in strengthening local resilience.
We are convinced that the First Responders Training in Emergencies contributes significantly to local risk awareness and community preparedness to live with them in a responsible manner. This reduces vulnerability and increases their capacity to respond to socio-natural events that may occur in an emergency.

Since the first training, developed in 2013, we have had the support of ONEMI for the recognition of this practice as a contribution to Community Preparedness to respond to emergencies. In 2018 we will develop a joint agenda to include these trainings, together with the CERTs, as a means of building local communities resilience, proposing to increase the number of GR3 instructors in Chile with ONEMI and World Vision funding. On the other hand, and for the sustainability of the community experience, there are plans to work with local churches that can make this practice sustainable.
From our perspective and in accordance with available indicators in this regard (iGOPP), there is an incipient development of disaster risk management in general, and with a greater absence in the area of local development, which, although it has good initiatives, does not have political or financial support for its sustainability. New options are opening up at the municipal level, but it is up to each local government to include this as part of the Community Development Plan. Institutionally, we advocate for community strengthening and therefore this training experience for First Responders in Emergencies has a non-negotiable local component.
Regularly, at the local government level, there is an Emergencies Office, or at best a Disaster Risk Management Office, which joins the Civil Protection Committee and the Emergency Operations Committee that should function at the same level. Each local government depends on its own organisation of resources for the execution of training, with regular support from universities, NGOs or other organisations related to the subject, efforts that are undoubtedly not sufficient.
There is no greater incentive for the use of funds in CBDRM, even funding from open calls are often not allocated to this area of action, even though they meet participation requirements.
We are influencing from our independent position, so that CBDRM is a priority. We believe that the fact that there is a national goal for ONEMI in this respect is part of the impact that we and other actors of organised civil society have developed over the last 8 years. There is no feedback established to follow up on these actions, which are not yet further developed as Public Policy itself. 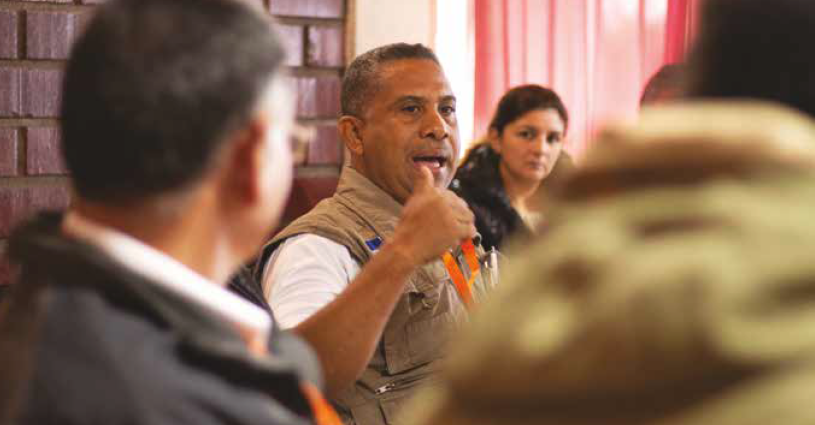