The project took place in two provinces and four communities of Lima and Ayacucho, the first one located on the coast and the second in the highlands, each one with its own characteristics.

Coast: According to the results of the Family Risk Analysis, the community of Primero de Marzo and Valle Sagrado located in the district of San Juan de Lurigancho in the province of Lima (Peru), is a primarily adult and extended population (families made up of parents, children, daughters-in-law, grandchildren or others). Most of the population of the district comes from the High Andean communities displaced by the socio-political violence of the 80s and others who migrated in search of better employment opportunities. They settled in risk areas (hillsides), in precarious living conditions, and in houses built on crafted stone walls (pircas) with wooden walls and ceilings, with no technical assistance, water or sewage services. Such conditions increased the vulnerability of families to potential seismic events. It was also identified that education institutions at the infrastructure level and their location were at high risk.

Highlands: The communities of Vinchos and Arizona are located in the Vinchos district in the province of Huamanga, Ayacucho region. Families consist primarily of an adult population, as most youngsters went to study in big cities. The main economic activity of this population is agriculture, which generates an average income of less than the minimum vital income. Finally, their homes are built mainly with mud (raw pressed earth) and the water they consume is not chlorinated.  The main dangers they face include rain, hailstorms and frost that affect their homes and production land. Students in education institutions were also identified as being exposed to hazards.

The project was developed in two stages:

Stage 1: The first stage lasted an average of 4 to 5 months.

The Risk Analysis (RA) was conducted in four communities at the family level. An average of 500 families were assessed for vulnerability and danger (through surveys) in order to identify the families that were more exposed, more fragile and less resilient to a possible disaster event. For the study, the assessment items were adapted according to the characteristics of the communities located on the coast and in the mountains. For example, the exposure of the dwellings to the dangers on the coast is of greater impact due to the fact that it is the only place where the family can live and, in the mountains their greatest concern is the loss of their agricultural land, which is the livelihood of the family.

The results of the vulnerability and hazard analysis were shared with the communities to make it clear which families were most vulnerable and what actions had to be taken at the family and community levels to help reduce risk.

The actions developed in this stage were:

2nd Stage: This stage lasted between 8 to 9 continuous months.

In this stage, actions proposed in the first stage were carried out in the short term, at the family and community levels. These included:

The partners who financed the project and proposed the Risk Analysis methodology were Diakonie Katastrophenhilfe – Germany.

The project lasted one year, ending in 2016.

It's been important to identify actions that are linked to the priority needs of the community, especially taking into account the timing and use of resources for the development of these actions. For example, in the coastal communities, the actions of improving the stones of their houses (pircas) will be continuous, as the population considers it a priority. In the hills, prevention actions programmed by the community continue and they do not require more resources. Such ongoing activities include cleaning of irrigation channels and cleaning of the community, among others. In both areas, the various long-term actions, such as: construction of retaining walls and/or planting of hills in deforested areas, require greater investment and the intervention of the authorities. Community leaders know the advocacy and management actions to this purpose required by their respective authorities. In the different actions community resources have been identified and, as a result, commitments have been made in return, transforming the population and the family into a strategic partner.
Some prevention actions have had a greater impact. They have been linked to the needs and interests of families and the community, which have improved the safety of family members and the security of their livelihoods. These actions have been like an intervention strategy to promote that risk prevention in a high-risk area is not only about saving lives, but also about improving community development. "On our anniversary we cooked a “pollada” to celebrate for the plans and our title. This allow us to be owners, so we can get loans." (Primero de Marzo, a member of the community) Another case: "I want eucalyptus because it has several lives, it is used for firewood and wood (....) but I plant it where I don't plant other products." (Rufina Cárdenas, inhabitant of Arizona - Ayacucho) "Planting live fences with a specific variety helps protect their crops and later they can be used in other derivatives that generate income.” (Henry Mercado - systematisation of experience of the 2016 project)

Sustainability of the project will be achieved when risk reduction actions contribute to improving their quality of life and protecting their livelihoods.
Peru has a National Disaster Risk Management Policy and a National Risk Management Plan, which is mandatory at all three levels of government in the country, such as including DRM in the development plans of each municipality. Implementation of these policies is slow, and efforts are mainly focused on corrective management. Our organisation coordinates with national and local level structures in strengthening capacities and promoting some prevention and preparedness actions.
Communities have their own community structures that assume the role of risk management committees promoted by governmental and non-governmental entities. Local governments develop local capacities in some communities, especially in those located in large cities, but still scarce in distant communities. The institutional contribution is to provide workshops and technical assistance to local governments and communities in the places where they intervene.
The government allocates resources to local governments for reactive (emergency response) and corrective management, and scarce resources to promote prospective actions, especially for the most vulnerable communities. Private financing is scarce.
In the implementation of the projects, the intercultural and gender approach is applied, and the use of the community's own resources is also promoted as a strategy. There are organised local actors in the country who influence risk management policies at the national and local levels. 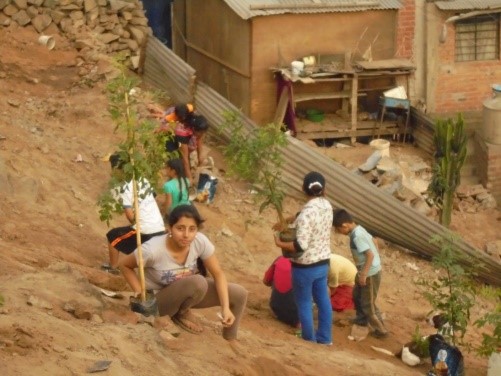