In October 15, 2013, a 7.2 magnitude earthquake occurred in the Philippines, affecting several provinces in Region VII. The quake left 227 persons dead, 976 injured and over 3 million people affected across the region. The damages to structures, roads, bridges and other public facilities amounted to over Php 2 billion. Among those that were severely affected by the earthquake was the Province of Bohol. It incurred over Php 1.3 million of damages and also recorded the highest number of casualties and injured persons according to the National Disaster Risk Reduction and Management Council (NDRRMC). In order to support the province in its rehabilitation and recovery efforts following the earthquake, and later on the impacts of super-typhoon Haiyan, the Center for Disaster Preparedness, with support from the American Jewish Joint Distribution Committee (JDC), led the two- year implementation of a project entitled “Towards Resilience and Development for Bohol Communities in the Aftermath of Earthquake and Typhoon Haiyan,” which focused on the recovery and rehabilitation of the communities affected by the 2013 earthquake and super-typhoon. The undertaking began in November 2014 as a 6-month project focused on awareness-raising and capacity-building in community-based disaster risk reduction and management (CBDRRM) of affected communities in the Municipality of Antequera, Bohol.

The activities conducted in phase one of the project were designed to complement the capacity-building workshops and prepare for the sustainable livelihood interventions of the second phase. The activities consist of capacity-building and awareness-raising trainings and orientations, such as participatory post-disaster needs assessment workshops, CBDRRM workshops, development of an early warning system (EWS), contingency planning workshop, community drill, and psycho-spiritual support exercises. The DRRM-related trainings enabled community members to learn basic concepts in DRRM, community risk assessment, early warning system (EWS), and DRRM planning. The outcomes include the formation of a Barangay Disaster Risk Reduction and Management Plan (BDRMMP), EWS, contingency plan and barangay hazard map. A simulation exercise was also conducted to test the effectiveness of their EWS and contingency plans for typhoons and earthquakes. Phase two of the project focused on the promotion of economic and livelihood sustainability; hence, its components included sustainable agricultural production (the setting up of a demo farmer field and school, workshops and skills-based trainings with a lens on organic approaches to farming, vermicompost production and organic composting), alternative livelihood production (along with hog dispersal), cooperative development, and social enterprise.

The project was also able to organise two community organisations to help the people sustain the initiatives – the Mag-aso Organic Farmers Livelihood Organization (MOFALO), which is a community association, and the Sto. Rosario Organic Farmers Association (SOFA). These organisations were provided with documentation for them to be acquainted with the process of running an organisation. The partners for this project included community members, including farmers (both men & women) and municipal and barangay officials.

One of the significant achievements of the project was the partnership established between the farmers’ organisations and Barangay Council members of Sto. Rosario and Mag-aso. The strong collaboration between the two groups was evident in the different project activities, which involved capacity-building on DRRM and agriculture, organic farming, livestock dispersal, and a cooperative store. Each of the farmers’ organisations in the covered areas has a set of officers comprised of purok (zone) residents and Barangay Council members. They are members of other existing community-based organisations, which relate to women, senior citizens, farmers, savings, and loans.

At the municipal level, the Local Government Unit (LGU) of Antequera has demonstrated staunch support by being open and receptive to the goals and activities of the project. The Municipal Mayor showed commitment to the project by being present in the major activities when invited. The LGU also provided free transportation for the beneficiaries from the covered villages to attend trainings and workshops organised under the project.

Furthermore, two LGU departments were also closely engaged in the project, namely the Municipal Disaster Risk Reduction and Management Office (MDRRMO) and Municipal Agriculture Office (MAO). The MDRRMO participated in the CBDRRM orientation workshop while the MAO provided seedlings and chickens to the two farmers’ organisations.

Apart from the local government, the project was able to mobilise partners from the national government, academia, and non-government organisations to extend assistance and collaborate with the farmers’ organisations in the covered communities. For capacity-building, the Philippine Center for Postharvest Development and Mechanization (PhilMech) was engaged to provide training on charcoal briquettes production for the beneficiaries in Barangay Mag-aso.

Representatives from the Department of Trade and Industry (DTI) also played a commendable role in assisting the beneficiaries to improve their bookkeeping and documentation skills through a training on entrepreneurship. On the other hand, for the provision of seedlings, the University of the Philippines Los Baños National Seed Foundation and the People’s Fair Trade Action Center (PTAC) were tapped.

The members of the organised group SOFA started putting their financial management training to good use and established a cooperative store in the barangay, which does not only serve as an alternate source of income for the group but a physical product and reminder of the profound effort and partnership between the community and the project. This is a strong indicator that the community owns this project.
Most of the community members who are actively involved in the project are women. These women experienced the gradual process of adjusting from life of mainly managing their households and children to engaging in barangay and project activities that require their attendance, participation, and active energy. In time, their husbands have also had some involvement in the project activities and were able to see and appreciate the gains of the project. These developments have enriched the lives of women in the community through opening doors of opportunity, widening their experience, and empowering their status and capabilities as providers for the family. CDP has always been adamant in its stance for inclusive and participatory processes. As such, the project made sure to engage with different sectors within the community and became an avenue for open and more elevated discussion amongst marginalised sectors. Women, older persons, and children took important roles in the project implementation and were always invited to take part in the different livelihood activities. In this manner, the project was able to foster a socially healthy and inclusive environment where people from all sectors are given the opportunity to work, learn, and grow.
Necessary adjustments were made to project activities after close consultation with the partner communities. The monitoring process was conducted through zone/purok visits, consistent communication via SMS and mobile calls, and immersion of some of the field staff in the area.

As in any endeavor, the project aimed to provide skills and knowledge that can be sustained for long-term utilisation. This can only be achieved through building on the collaboration and relationship between the project team and the partner communities. Given its two-year timeframe and the menu of activities conducted, it is no surprise that the project has made a significant impact on its partners. These significant outcomes result from the partnership that was carefully fostered between CDP, the partner barangays, and even the local government unit of Antequera. One of the significant outcomes of the project was the establishment of community organisations and thus community investment towards sustainability. Though the project culminated in 2016, the alternative livelihood activities continue to date, contributing to the normal income of the families prior to disaster. With the set of skills in place, preparedness to any form of disaster is now established.
As a result of the project, the majority of the community members have adopted organic gardening. Several members currently maintain small organic gardens in their backyards. Organic farming practices do not only provide health benefits but several health gains as well. Other community members have also developed a means for additional income through selling their organic fertilisers and pesticides such as vermi, vermicast, and fermented plant and fruit juices. The association members who practice organic farming are confident that they can re-echo and share these practices with other farmers. Some of these farmers began informally communicating their knowledge and have shared these practices to relatives and neighbours. In addition to the alternative livelihood opportunities provided by the project, organic farminghas become a supplementary source of income. One association member from Barangay Sto. Rosario shared how she sells vermin compost to farmers from other areas at five pesos (Php 5) per bag. Both associations of Mag-aso ad Sto. Rosario undertook the management of the multi-animal housing in the demo farm. Sto. Rosario has already started the dispersal of piglets and chickens and earned a substantial amount from their sales. In Mag-aso, at least 4 families are practising hog-raising. Through different capacity-building measures undertaken in the duration of two years, community members of Magaso and Sto. Rosario have acquired skills in entrepreneurship and organisation management. For many of the community members, this experience counts as a first in organisational management. In this manner, the project has provided an avenue for the community members to acquire new skills in leadership and management. The project has also paved the way for the community to link with other stakeholders in the area. It has facilitated the partnership between community people and the local government agencies in Antequera. In a way, the project also helped the farmers learn how to communicate, coordinate, and build partnerships with the institutions that are responsible and capable of providing certain services. The established community organisations are now duly registered to the Department of Labor and Employment or DOLE — another significant milestone for both barangays as none of the other local CSOs in the areas have yet to formally register. These activities have paved a way for stronger and more substantial partnerships between the community, LGU, and other outside agencies. The intervention also enabled the community members to be more proactive. Local officials gained skills in preparedness and response to disasters. Women have reached a certain degree of empowerment and the DRRM practices have been brought to the household level. 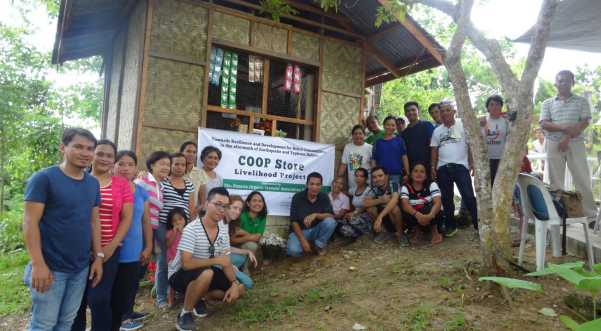