This project was carried out as an emergency response to the mudslide/flood disaster that took place in August 2017, in order to save lives and properties of inhabitants living within the affected localities and further institute impact mitigation measures.

The following activities were carried out in the disaster aftermath:

The above mentioned activities were supported through the following ways:

Below is a list of other actors that were involved in the disaster response:

The project lasted for four months ( August-December-2017) and ended its emergency program December 2017, but remains on the post emergency intervention.

Local skills and knowledge were used during the humanitarian response process. The intervention of the local government within the response process was pivotal. Ward counsellors worked through their ward development committees and traditional leaders in the mobilization of community members to actively participate in the rescue of victims trapped under the rubble. Local government was involved in the identification and transportation of corpses to nearby health facilities. The local government was also involved in radio panel discussions and community outreach programs. The DMR activities are coordinated through regular coordination/consultation meetings of key stakeholders in the disaster management response. It is through these regular meetings that roles and responsibilities are assigned, and strategies and policies are developed that guide stakeholders’ interventions. The Ministry of Social Welfare, Gender and Children’s Affairs has the statutory responsibility of providing protection services for children, women, men, persons with disabilities and the aged. The ministry performs a key statutory role in the disaster management framework in collaboration with other relevant MDAs, civil society actors and other structures in the protection and provision of support efforts to the aforementioned constituents during humanitarian emergencies.
The marginalised and at-risk groups were actively involved right from the planning, all the way through the implementation processes. The youth served as first responders and were actively involved in rescue efforts. They were also involved in community mobilization and identification of victims affected during the registration process EVD survivors were marginalized to some extent in the response effort.
It was unprecedented for us as a nation to experience mudslides. As a result, there was a general review of existing humanitarian approaches to capture current realities. The mudslide disaster ushered in a complicated humanitarian situation which humanitarian responders had to contend with. After the mudslide, advocacy and sensitization were used as approaches to enhance community resilience and adaptation. The use of technology is now also used to be able to track early warning signs, and mobility tracking and other technological apparatus are to monitor DRM compliance. Monitoring and learning is coordinated by the Ministry of Social Welfare, Gender and Children’s Affairs

There is provision of social protection services such as direct cash transfers, relief support services, and enhanced engagement with affected people. Local human and material resources were used to a very large extent. The CBDRM initiative goes beyond the emergency period to the recovery period and all the way back to the pre-disaster phase, as a result of lessons learnt and best practices derived from previous experiences. There is a need to create community resilience after the disaster and the need to put in place preventive mechanisms in order to prevent/minimise recurrence of such experiences.
The CBDRM initiative in the wake of the mudslide has been able to create life-changing impacts through: - Opening up space for community participation in disaster risk reduction initiatives. - Increasing community interest in monitoring environmental issues. - Creating multiplier effects on civil society engagements in collaboration with community members in raising public awareness on attitude and behavioural change towards the misuse of the environment. - As an impact mitigation measure for victims affected, a direct cash transfer payment was established. - The CBDRM initiative has been able to create more community awareness about the dangers of residing in disaster prone areas.

Currently Sierra Leone does not have Disaster Management Act. The Ministry of Social Welfare has a relationship with national structures (MDAs, CSO, CBOs) etc.
The Ministry has initiated the decentralized system with short and long term planning processes which include: 1. Establishment of a decentralized planning process at the sub-national level and the development of the Community Development Plan under the coordination of the Ministry. 2. A community-driven development project providing improved access to and use of basic infrastructure and services through a people-centered approach. 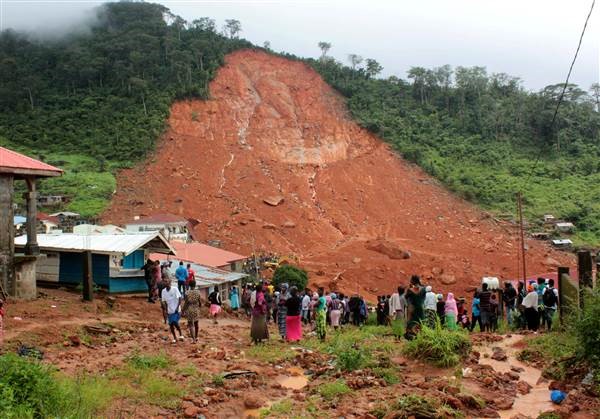